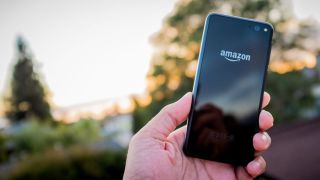 Rumors over the weekend suggested Amazon is hard at work on its own messaging platform to compete with the likes of Facebook, WhatsApp and maybe even workplace solutions like Slack.

It’s rumored to be called Anytime and it was reported by AFTV News after Amazon began surveying customers about potential innovative features for the new service.

The leak has suggested a variety of features for the service with ideas such as video and voice chat, the ability to play games with your friends and even put filters over photos within the app.

Despite that, Amazon will have a lot of work ahead of it to beat the current big names in the space, considering Google Allo even struggled to make an impact when it launched last year.

There's currently no word on when Anytime will be officially announced or when it will be released to the public, but considering Amazon is still surveying customers for potential features we can speculate the launch will be at the end of this year or even pushed into 2018.

Here are all the features we think Amazon may be able to use to get ahead of WhatsApp and Facebook Messenger.

It won’t need your phone number

According to the leak, you won’t need to have your phone number attached to your Amazon account to use the service. Instead you’ll be able to communicate with just your friend's name.

WhatsApp needs your phone number to set up your account, while Facebook Messenger also requests your number and asks to be the default app for SMS, so it would make sense for Amazon to avoid this.

The leak has a section called “private and secure” that suggests encryption will be a part of the service, but that it won’t be used across the whole messaging app.

We’d prefer to see Amazon introduce encryption as standard across all of its messaging though, so you don’t have to think about when you want to keep details secret. That’s the only way it’ll keep pace with WhatsApp.

GIF integration is teased in the leaked details for Amazon Anytime and while Facebook and WhatsApp both offer it as an option, it’s hidden away in each.

You have to click quite a few times throughout both apps to be able to find GIFs, but here we hope it’s something you can easily find and which doesn’t take much effort to do, so we're more encouraged to send everyone appropriate moving images.

It’s not explicitly stated in the leaked details, but we’d expect Amazon to integrate its own voice assistant Alexa into the app directly.

That would give you access to Alexa services on iPhone, Android and on desktop as well, and you may even be able to connect Anytime to your Amazon Echo too.

One of the subheads for Anytime is “new ways to hang out”, followed by the suggestion that you’ll be able to share your location and listen to music within Anytime. But how about if Amazon takes it one step further and allows you to watch movies together?

With Prime Video a big focus of Amazon’s strategy, maybe the company will be able to make group chats where you can enjoy your favorite TV shows and movies at the same time?