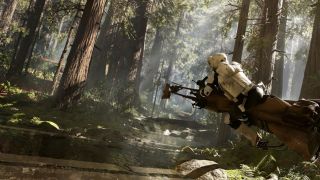 Hopefully we'll get to shoot Jar Jar in the face

If you're as excited as a Wookie on Life Day for the impending arrival of Star Wars Battlefront, then you're probably going to want to make your way to this year's EB Games Expo.

The show has confirmed that the game will be playable for Australians for the first time exclusively on the PS4 stand on the show floor.

Also exclusive to Sony's stand this year will be the latest iteration of Call of Duty: Black Ops III, with titles like Assassin's Creed: Syndicate, Rainbow Six Siege, Guitar Hero Live and BattleBorn all confirmed to make an appearance at the Expo

There'll be no Fallout from this decision

Perhaps even more exciting for some punters is the news that Bethesda, hot off its inaugural E3 keynote, will be showcasing Fallout 4 at this year's Expo.

Also available to experience will be some of the latest Xbox One games, including Halo 5: Guardians and Rise of the Tomb Raider, plus tom Clancy's The Division.

Throw in a little Just Cause 3, some Uncharted trilogy and the family friendly trio of Just Dance 2016, Skylanders Superchargers and Disney Infinity 3.0, and you've got a pretty impressive games lineup, with the EB Games Expo still months away.

The show will be held at the Sydney Showgrounds, October 2-4.