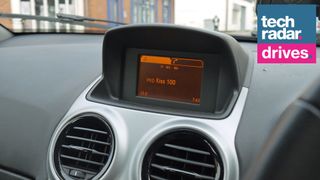 I’m starting to resent my car.

Just over five years ago I was full of youthful glee as I drove my shiny new Vauxhall Corsa off the forecourt of my local dealer. It’s the first car I had properly owned – rather than borrowing my parent’s cars – and it had Bluetooth connectivity. BLUETOOTH! It was the ruddy future people.

Boy was I excited. I could connect my smartphone to the car, allowing me to make and receive calls via the controls on the steering wheel without the need to touch the phone when driving. But that joy has quickly faded.

The car itself is still going strong, with 45,000+ miles on the clock it’s running well, it’s got decent storage, two drink holders and the three seats in the back are handy when it comes to transporting friends, family and the two cats.

My disdain is directed at the orange dot matrix screen that sits atop the center console – a repugnant beacon of a bygone technological era that flips me off every time I start the engine.

There’s no way I can afford a new car – those cats aren’t cheap to run/feed/keep alive/whatever it is – but I’d love to spend some cash (a few hundred perhaps) to replace the obnoxious “infotainment” system.

Being able to literally undock the display from the dashboard and replace it with a larger, color touch display with features including Android Auto, Apple CarPlay, DAB radio and satellite navigation all built in would be ideal.

Chipsets, modems and connectivity modules are all small enough to build into a manageable package – it would be the equivalent to sticking a 7-inch tablet onto your dash. All I’d want on top of this is a link to the car’s stereo, microphones and vital stats.

I’ve spoken to various firms over the years who have teased the possibility of upgradable, modular in-car infotainment systems, but because the automotive industry moves so slowly compared to the rest of the tech world we’re still a few years off this potentially becoming a reality.

One of those firms is Qualcomm, who has been showing off tech-laden cars at trade shows for a few years now, but most of the technology - and the promise of components with a 10 year lifecycle which will hopefully see the systems keep up with your smartphone's advancements - are yet to make their way into production vehicles.

Meanwhile Google is joining forces with Audi and Volvo to bake a vehicle-friendly version of Android directly into a car's infotainment system - going far beyond the offering in Android Auto.

Rather than Android running over the top of your car's standard system, Android will be the core operating system with access to Google Maps, Assistant and streaming services such as Spotify.

The plan is to have this in new Volvo and Audi cars in two years time, but there's no guarantee we'll get there before autonomous cars take over and the infotainment is shifted to our smartphones as we won't be driving.

It's all a bit disappointing.

The easy solution is to buy a new car with the likes of Apple CarPlay and Android Auto already built in, but I unfortunately don't have a bottomless pit of money.

These systems rely more heavily on your phone, and the apps you've downloaded, which gives them a bit more longevity than standard infotainment options.

This doesn't solve my current predicament then, and while you can buy third party infotainment solutions I don't like the idea of having additional devices clumsily stuck around the cabin. I'm looking for something seamless that fits into the current makeup of the car.

For now, I'm stuck with a display which smugly sits there and laughs in my face and I dream of a world where I can throw it out the window on the motorway and replace it with something significantly better.