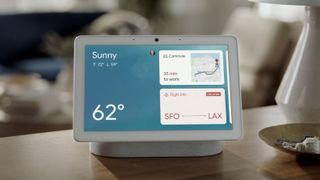 This year at Google IO 2019, we were shown all manner of things - and once again, it was the hardware that stole the show, although there were some rather intriguing new concepts that show Google is both worried about privacy and not seeming inclusive enough.

Last year we saw a huge update to its Android P operating system, first mention of a Google Maps AR mode, and a host of new features across Google's extensive software and hardware ranges.

This year, there was plenty of hype around the event - helped in no small part by the rumors surrounding the Google Pixel 3a handset, and Google's own accidental leak of a successor to the Google Home Hub. Sure enough, we got the goods on both these products, and more.

Read on below for everything that was announced at the Google IO 2019 keynote, and anything we know about their release dates, prices and features.

We'd had a good look at leaked renders in the build up, but this was Google's first public announcement of the Google Pixel 3a handset, a mid-range offering with some flagship specs at $399 (£399, AU$649).

Unlike the more premium Pixel phones, you even get a 3.5mm headphone jack, for those of you who haven't yet jumped to wireless headphones.

You can see what we make of it so far with our hands on: Google Pixel 3a review.

If you're after a cheaper Pixel handset but don't want to compromise on screen size, then the 6-inch Google Pixel 3a could be the phone for you.

It's a touch more expensive than the standard Pixel 3a (AU$799), and you get the same power, cameras, design and features including a headphone jack.

It's a solid handset and you can find out what we think with our hands on: Google Pixel 3a XL review.

As accidentally leaked on Google's own product website last month, we are getting a Google Nest Hub Max - a union between Google's Nest and Home product ranges, which apparently will be joined together going forward.

Confusing branding aside, the Nest Hub Max boasts a 10-inch screen over the Home Hub Max's 7-inch display, and will also feature a Nest security camera for video calls and keeping an eye on your home when you're out.

Google is clearly aware what a hot topic privacy is these days, and was quick to clarify that the Nest camera would only record when actively enabled, while the Hub would come with a physical switch on the back of the device to disconnect the camera and microphone.

Read our hands on: Google Nest Hub Max review to find out what we make of it.

As Google shifts it focus to the Nest-branded speakers, the Google Home Hub will drop from $149 to $129 (down to £119 in the UK and AU$199 in Australia), and is coming to "12 new markets and supporting nine new languages."

The next Android operating system, Android Q, isn't launching until later this year, but that didn't stop Google from showing off some new features for the next update.

The OS will bring your security settings higher up in your phone settings, and give you reminders whenever an app accesses your location history (and stop the app doing this when you've closed it).

We also got a glimpse of Android Q's dark theme, which turns your phone's interface black and will automatically turn on with battery saver (you know, to save battery life).

Google kicked off the keynote with Full Coverage: an expanded algorithm for Google search results that will be smarter about what it shows to you. If you're researching a recent news story (say, Brexit), it will show you a timeline of events and explainers that go into finer detail alongside more general results.

Google will also be looking to incorporate 3D models into search results, which can then be conjured into your surroundings with your phone camera. If you're buying some new furniture, it may be what helps you decide what just looks right with the wallpaper.

Duplex on the web

We got a glimpse of Google Duplex at last year's I/O keynote, where the AI program managed to book a haircut appointment over the phone. Duplex is currently available in 44 US states, and is continuing to help citizens avoid ever speaking to a small business again.

Google is looking to expand this feature into 'Duplex on the web', where Google Assistant will be able to book movie tickets, make car rentals and generally help you complete long detail-heavy forms online without having to type everything in yourself. No word on when we can get it abroad, but it bodes well as a time-saver.

While Google Assistant has flirted with driver-friendly features in the past, Google has only now announced an official Driving Mode for using your phone in your car safely.

By calling out "Hey Google, let's drive" the mode will kick into gear, bringing up a simplified interface of your most used contacts and most relevant apps (Google Maps, Calls, etc).

Auto-delete your data away

For those who don't like all their data being stored forever on some Google server in the desert, Google has now launched an auto-delete feature on the Android Q beta, which allows you to set limits on how long you want your data backed up.

Three months? Two years? Google will make it so.

Google made much of its improved text-to-speech and speech-to-text transcription software, with a big stress on helping those who are less literate or struggle with speak impediments.

Incoming features included being able to photograph real-life text and hear it spoken and even translated by Google Assistant by the fly. Others included Live Captions for transcribing speech during live videos, allowing you to watch muted video footage or phone calls without missing out on what's being said.

Google also formally announced its Project Euphoria initiative, which uses machine learning to incorporate speech patterns from, say, stroke sufferers, or those with degenerative illnesses who struggle to be understood by today's voice assistants.