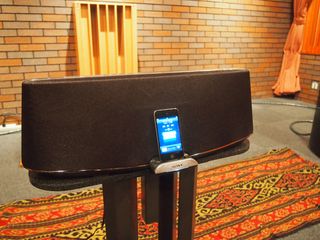 Sony sells more iPod docks in the UK than any other brand, and it launched its new XA900 flagship model at CES last month.

However, it isn't until now that anyone has been able to actually have a proper listen and we can report that it's a luscious beast to be sure.

TechRadar was given a demo during a week with Sony in Tokyo, and we can report it may be the best sounding iPod dock ever created.

While the B&W Zeppelin might claim to be the audiophile's dock of choice at the moment, we cannot wait to give this dock a proper test to see exactly how it stacks up in real-world conditions.

It utilizes Sony's brand new magnetic fluid speakers to produce absolutely superb sound. We heard several tracks including the Adele track 'Someone Like You' which Sony actually used to tune and develop the device.

We're not the biggest fans of Adele, but the unique way that this particular song is recorded makes it an excellent demo track.

It's also network compatible and can utilise AirPlay to play wirelessly form an iPhone even when it's not docked, and Bluetooth is included as well.

Highs, lows and midrange were handled with considerable excellence, and so if you're interested in buying one later this year you might want to start saving now.

There is no official Sony RDP-XA900iP price yet, but we understand it will cost somewhere in the region of £499.