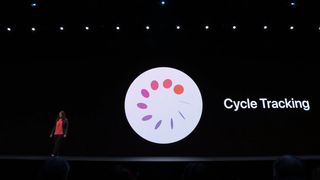 Apple has announced that its new watchOS 6 will come with Cycle Tracking, enabling users who menstruate to keep an eye on their monthly cycle.

The feature will allow users to log key aspects of their periods and fertility, even sending users notifications when their period is about to start, giving them a heads up to stock up on sanitary supplies (and painkillers).

As well as logging users' menstrual cycles, Cycle Tracking will also give fertility window predictions, which is helpful for those who are trying to conceive – or not to conceive, as the case may be.

The feature will also be available in the iOS health app, so you don't necessarily need to have an Apple Watch to access it.

The rise of cycle trackers

Fertility and period-tracking technology has been around for a while now, and is largely seen as a positive step forward, arming women and people who menstruate around the world with more knowledge about their bodies.

However, this kind of technology doesn't come without issues; for example, popular fertility tracking app Natural Cycles, which is claimed to be able to plan and prevent pregnancy, has come under fire for allegedly leading to a number of unplanned pregnancies.

In an interview with TechRadar, Leslie Heyer, CEO of Cycle Technologies and creator of the Dot app told us that she had concerns that "there are a number of fertility technologies that are making misleading and/or bold claims without having significant evidence to support these claims".

"This has the potential to undermine the whole industry, and does a real disservice to end users,” she explained.

Furthermore, some users may be worried about storing sensitive data in the cloud; after all, we all know that it's not impervious to hackers.

During the WWDC keynote, presenter Dr. Sumbul Desai said that "all health data is stored securely and you can control you data, choosing what (if anything) is shared with other apps".

Whether Cycle Tracking will prove useful to its users remains to be seen, but there's no doubt that a large company like Apple shining a spotlight on menstruation, and fertility, could go a long way towards breaking the stigma surrounding women's health, while helping users to gain a more informed knowledge of their bodies.