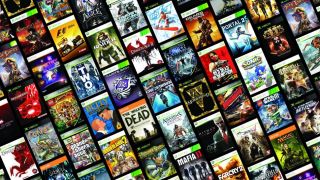 Around the same time that Microsoft revealed the first details about its next console, Project Scarlett, the company also announced the final bunch of games coming to the Xbox One backwards-compatibility library.

It marks the end of one of the best initiatives of this console generation, with over 600 games from the original Xbox and Xbox 360 becoming playable on Xbox One. Many of these games even received extra technical updates on Xbox One X, such as improved resolutions, anti-aliasing, frame rates and load times.

It's a feature we're told to expect again with the next Xbox console, and being able to play games from previous generations will no doubt be a big sticking point for the great Xbox Scarlett vs PS5 battle coming next year.

For now, though, with the Xbox One's library of backwards-compatible titles now complete, we’ve decided to round up the 10 best Xbox and Xbox 360 games lining its shelves today.

Of the final 23 games added to the backward-compatibility library, the most tantalising additions were from Tom Clancy’s seminal sneak-em-up, Splinter Cell. To this day, few games utilise the spectrums of light, sound and sight quite like these, and while later series entries like Double Agent and Blacklist (also backward-compatible) may have more technical prowess, Chaos Theory remains nigh-on perfect.

Hero Sam Fisher is as acerbic as ever, with a small but precise toolset that includes listening devices, a OCP that disables electronic devices, and a combat knife that lets you threaten enemies you interrogate. Missions like Bank and Hokkaido are pinnacles of stealth level design, and both the co-op and Spy vs Mercenary multiplayer hold up well today.

Arguably Peter Molyneux’s last great game, Fable II felt like it could’ve been the direction that future RPGs would take when it came out in 2008. It let you do just about everything, such can getting married, buying a house, starting a family and taking on menial employment alongside the usual business of becoming a high-fantasy hero.

The combat hasn’t aged that well, but the writing, dialogue choices, and whimsical world are a nice break from today’s trend towards darker fantasy stylings. Fable II received the Xbox One X Enhanced treatment, so its flumpy art style really pops if you have the hardware. It squeezes in a half-decent co-op mode too.

Some would say that the original Red Dead Redemption continues to be the best open-world western ever made. It’s certainly a much smaller game than its epic successor, but that also makes it pacier. It’s a straight-shootin’ romp following John Marston, one of the last living members of the outlaw posse from Red Dead Redemption 2, as he’s forced to hunt down his former accomplices. It’s perfect to go back to after you complete the prequel.

It’s a sobering tale, but the crass, comical characters Rockstar is renowned for still imbue it with plenty of humour. The arid, dust-swirling climes of the game world look so good on Xbox One X that you can practically feel the sand gristling between your teeth.

Arguably the best-value videogame bundle you can buy on disc, The Orange Box contains Half-life 2, both its expansions, Portal, and Team Fortress 2. The only downside going back to it today is that Team Fortress 2 – as with most online Xbox 360 games – is pretty much barren (just play it on PC – it’s free).

Beyond that, Half-life 2 remains one of the best narrative-led first-person shooters ever made. It takes eternally mute hero Gordon Freeman through a near-future, Soviet-style dystopia of City 17 - the heart of a nefarious multi-dimensional empire known as the Combine. It revolutionised in-game physics (ahh, sweet Gravity Gun in Ravenholm), which Valve later took in an ingenious new direction with first-person puzzler Portal.

5. The Witcher 2: Assassin of Kings

The Witcher 3 is a defining game of this generation, and one of the best RPGs ever made. Its predecessor is more linear and smaller in scale, but tells an incredibly tight story as Geralt seeks to clear his name and track down the assassin of the Emperor.

It’s not open-world, but The Witcher 2 is filled with big, distinct locales with a great sense of place – from the humble village of Flotsam to the stunning city of Loc Muinne. It presents you with meaningful choices that branch the story and affect the ending, and is in some ways more focused than its formidably sprawling sequel.

Essential for those looking to dive deeper into the compelling dark-folky world of Andrzej Sapkowski’s imagining – or those with time to kill before the launch of CD Projekt Red's next game, Cyberpunk 2077.

There’s no trio of video-games quite as inseparable as the Mass Effect trilogy. Across all three games, your decisions affect how subsequent ones pan out, and even if you still haven’t forgiven that infamous ending to this glorious space opera, the interstellar journey remains a memorable one.

As Commander Shepherd, you assemble a motley crew of space soldiers aboard the SSV Normandy, travelling between cosmic outposts and constellations as you take on the galaxy-devouring Reapers.

Inevitably, things get pretty steamy when you’re sharing dorms and condensed blocks of space food every day in tight confines, and the trilogy is infamous for the myriad relationship and romantic interests Shepherd can pursue with his/her crewmates.

The ultimate symbol of its era, Gears of War 2 may be a gritty shooter with the colour palette of a dilapidated coal factory, but it’s among the best of its kind. The single-player campaign is a butch but self-aware blast through the ruins of fallen human civilisation as you take on the Locust threat. Expect plenty of grizzly jarhead dialogue and quips as Marcus Fenix, ‘Cole Train’ and the rest of the Band of Bulbous-Bicepped Brothers make a return.

The gameplay loop is a blistering mix of stop-and-pop shooting, Active Reload, and the kind of dodge-rolls that really shouldn’t be possible for men wearing such inordinately girthy armour. It looks glorious with 4K enhanced textures, and its campaign can be played cooperatively online or in split screen – though you’ll be lucky to find an online competitive match these days.

Yes, there’s only so much you can do to those twiggy character models whose visible joints give them the appearance of cheap action figures, but San Andreas is worth going back to for other reasons. There are three cities and a whole bunch of backwater to explore, and its ghetto-tale, inspired by classic movies like Boyz N The Hood and Menace 2 Society, is still possibly the best GTA story to date. Don’t forget that secret local co-op mode too.

It captures that early 90s feel perfectly, letting you evolve your avatar’s appearance RPG-style, then head out on turf wars in your bouncing lowrider to the sound of Public Enemy. Enhanced on Xbox One X, everything from the smoggy Los Santos sunset to those perfectly anti-aliased powerlines looming over the hood feels reinvigorated.

It’s hard not to be endeared to Oblivion’s mix of a sweeping high-fantasy world and the innate jankiness that runs through its physics, voice-acting and writing. It’s a huge game – especially with the kooky Shivering Isles expansion – and features some of the best quests in the entire series; we doff our hats to the Dark Brotherhood questline in particular, and the unexpected voyage where you wake up on a ship tavern to find it hijacked by pirates.

It’s also filled with strange AI-driven scenarios that never get old. Whether it’s the disjointed dynamic conversations you overhear between NPCs in town squares, or the way a minor fistfight can escalate so far that the City Watch fight each other to the death, Oblivion is a truly timeless oddity.

Outside of the PC crowd, Morrowind isn’t as widely remembered as later Elder Scrolls games, but its otherworldly setting and heavier reliance on written dialogue gives it an elegance lacking in its successors. Together with the Bloodmoon and Tribunal expansions, it’s still an RPG of incredible scale.

The Xbox One X Enhanced version boosts the frame rate to a steady 60fps and does a great job of smoothing out blurry textures and rough edges. You don’t get widescreen, and the pop-in from the all-enveloping fog is a bit jarring, but its unique atmosphere makes it more than worthy of playing on a large screen with a gamepad.

With Elder Scrolls 6 coming who-knows-when, there's plenty of time to go back and enjoy the old classics in the iconic fantasy series.