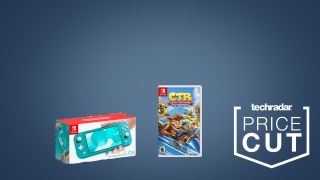 The new Nintendo Switch Lite - and this deal bundles in the revived Crash Team Racing to save you $20 off the combined price. (Not in the US? Check below for deals in other regions.)

The Switch Lite packs in the same sweet on-the-go action at a lower price than the original console. While it can’t link up with a dock for big TV action, its smaller form factor is a lot more convenient to tote around.

Nintendo Switch Lite bundle + CTR $213 at Walmart
Pick up this bundle to get both a Nintendo Switch Lite and the remade Crash Team Racing for $20 off the combined price of both, giving your new console owner a great start to their Switch adventures.View Deal

It’s a great beginning game to bundle with the console at a price to save any late holiday shoppers. If you're looking for different discounts, check out our Nintendo Switch deals page.

And if you're not in the US, scroll below for Nintendo Switch Lite deals in your region.