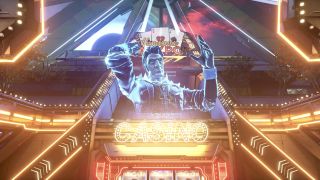 Borderlands 3 landed on PC and consoles this year, but now you keen looters and shooters have the chance to download the game's first campaign add-on, Moxxi's Heist of the Handsome Jackpot.

While Handsome Jack himself is no longer around to grapple with, his legacy lives on in the casino that takes his name, with more than enough of his visage flaunted around the neon strips and floating holograms of the establishment.

You can catch a glimpse of the usual mayhem in the trailer below, showing off the mastermind behind your upcoming heist, Moxxi, and the sentient slot machines and absurdly-dressed enemies looking to shoot you down before you can make off with your winnings.

It's good news for Google Stadia players, too, who have just had Borderlands 3 added to their still relatively small lineup of games – although this campaign add-on won't arrive until early 2020, which may be a sore sport for some players.

You'll get to grapple with more than just Handsome Jack's holographic visage, though. The trailer shows off a seeming Handsome Jack lookalike, which eagle-eyed fans may recognize as the villain's doppelgänger Timothy – a playable character from Borderlands: The Pre-Sequel who underwent surgery to act as an exact body double of the charismatic antagonist. Want to play against Handsome Jack instead? Borderlands 1 and 2 are still out there for you to play.

What does this mean for the story of Borderlands 3? Who knows. You can find out more, or just run around gunning without much care for the story, on PS4, Xbox One, and PC now. Just remember: the house always wins.