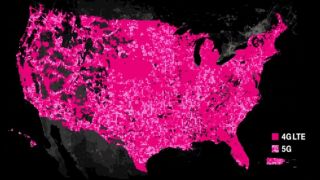 T-Mobile just jumped ahead of schedule by launching its 5G network, meaning you won't have to wait until the planned December 6 date to test it out.

The move coincides with the debut of the specialized OnePlus 7T Pro 5G McLaren Edition phone, which joins the Samsung Galaxy Note 10 Plus 5G and Galaxy S10 5G as the first of T-Mobile's 5G phones to be available starting today.

T-Mobile announced in the launch with press release and a goofy video shared by CEO John Legere on Twitter.

T-Mobile boasts that the difference between its 5G network and those from competing networks like Sprint 5G and Verizon 5G is the wider coverage map. It's able to offer broader coverage because the company is using the 600MHz spectrum for the foundation of its 5G network.

While Sprint's and Verizon's 5G networks are available in select cities, with coverage further limited by the employed spectrum's ability to penetrate buildings (a weakness we experienced in our testing, especially with Verizon), T-Mobile claims its 5G network now covers one million square miles and 60% of the US population.

There are trade-offs to the broader T-Mobile coverage maps. Its newly deployed 5G network operates only on that low-band 600MHz frequency right now, which means it doesn't offer the same insane data throughput we've seen from Verizon's mmWave in our 5G speed test.

In fact, in its press release, the word "fast" isn't even mentioned, and "speed" is mentioned only once. Until the merger between Sprint and T-Mobile goes through, T-Mobile may not be able to compete with the others in terms of speed.

But T-Mobile has teased that faster 5G. The end of the launch video hints at the "New T-Mobile 5G" network that would be enabled through the carrier's merger with Sprint and integration of mid-band spectrum.

T-Mobile is offering its 5G service in a number of forms, from its unlimited plans to pre-paid options. The high-end devices from OnePlus and Samsung are also just the start, it says. The official plans are to offer 15 more 5G phones in 2020.