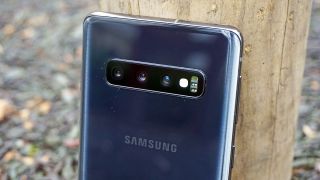 The Galaxy S20 Ultra could have a much better camera than the S10, above (Image credit: Future)

One of the most exciting features of the Samsung Galaxy S20 Ultra could be its rumored 108MP camera, and a new Samsung trademark application all but confirms that it will take 12MP photos.

Samsung has applied to trademark a tech called ‘Nonacell’, as spotted by LetsGoDigital, and while the trademark doesn’t go into detail, it does make it clear that this tech is related to cameras, and from the name and other leaks we have a very good idea of what it does.

First up, that name. Samsung already uses a tech called ‘Tetracell’ in some of its cameras to essentially combine four pixels into one, so it makes sense that Nonacell would do something similar. But ‘nona’ means nine in Latin, so logically this would combine nine pixels into one, which with a 108MP lens would mean taking 12MP shots, because 12 x 9 is 108.

Not a new name

There’s no guarantee that this tech is going to be used with Samsung’s 108MP camera, but it looks very, very likely, as this isn’t the first time we’ve heard of it.

Back in December, @UniverseIce (a reliable leaker) tweeted that Samsung would use exactly this tech in its 108MP camera, even mentioning Nonacell by name, so this trademark application pretty much confirms that’s going to happen.

So what’s so good about combining nine pixels into one? It makes them a lot bigger, thereby vastly improving low light performance, and since you’ll still be taking 12MP shots you won’t be sacrificing too much detail. After all, many high-end smartphone cameras are still only around 12MP to begin with.

What’s not totally clear at this stage is whether you’d also be able to take 108MP shots with the camera, but we should find out very soon, as Samsung is expected to unveil the Galaxy S20 Ultra alongside the Samsung Galaxy S20 and S20 Plus on February 11. TechRadar will be reporting live from the event, so stay tuned for all the details.