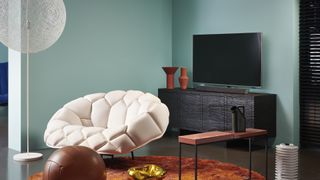 Remember the ace Bowers and Wilkins-tuned soundbar that came integrated with the top-notch Philips OLED+984 TV? As with all good things in tech, from 2020 you'll see that kind of dedication to built-in audio trickle down into Philips more affordable TV sets.

Philips is continuing its open approach to high dynamic range formats, supporting all the major types including HDR10+, HLG and Dolby Vision.

Both sets will also feature, three-sided Ambilight for blooming behind-the-screen lightshows, Dolby Atmos audio processing, Android 9.0 as the operating system, and support for both Google Assistant and Amazon's Alexa voice helpers. Disney+ apps will be landing on the TVs in time for the European launch, too.

Pricing and availability is yet to be announced, but we'd expect to see them on shelves before the first half of the year is out. Remember, the European TP Vision-arm of Philips doesn't distribute sets in North America – it has a different (read: inferior) range built by Funai.

After something a little more premium in the picture stakes? Check out the newly announced, AI-powered, OLED805 and OLED855 models, too.