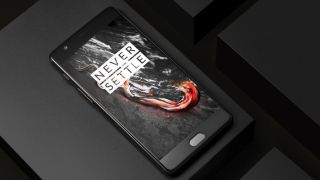 Like the look of the OnePlus 3T but wish it was just a little more black? As black as midnight, for example? Then your prayers are about to be answered, as OnePlus has announced that it’s launching a limited edition Midnight Black version of its flagship handset.

It’s not clear just how limited this edition will be, but the first 250 units will be available from HBX from 9AM PT/4PM GMT on March 24.

When you inevitably fail to be one of the first 250 though you’re not out of luck, as OnePlus will also be selling the Midnight Black OnePlus 3T on its website for a limited time at an undefined later date, while UK customers will also be able to grab it on an O2 contract from March 28.

Apparently OnePlus went through more than 30 color iterations before reaching this particular shade of black, which is achieved through three dark coatings of paint and two sandblasting treatments.

Color aside though this is exactly the same as the not-at-all-limited Gun Metal and Soft Gold versions of the OnePlus 3T, so you’ll get a 5.5-inch 1080p display, a metal unibody, a high-end Snapdragon 821 chipset and 6GB of RAM.

And you won’t pay any more for the Midnight Black model either. It’s only available in 128GB (where the normal version can also be found in a cheaper 64GB variety), but it costs the standard $479/£439 (roughly AU$630).