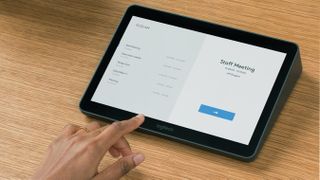 The Logitech Tap is part of the Logitech conferencing solution that works with cameras, microphones and speakers across Microsoft Teams, Google Hangouts and Zoom services. Logitech provides this solution for all sizes of teams - from a single-user room to one with over forty participants.

If you need to conduct a video call or conference, you will need to provide your own television or projector and a Small Form Factor PC (if required by your setup), but everything else for that meeting can be powered by a Logitech product.

To start off, Logitech offers a variety of high-end video cameras such as an ultrawide camera for tight spaces to AI powered cameras that can focus on attendees. During the demo, the camera was able to distinguish the people in the room from the background and automatically adjusted the framing to zoom and show everyone in the room.

Depending on your setup, the microphone built on the camera could be enough, or you could add additional Logitech Rally Pad mics. These mics can capture audio across all angles, and in a room where we had about ten people, Logitech had set up two microphones. As per the specs, each mic has a range of 4.5m in each direction, which means that one mic should be sufficient between 4-6 people.

The same thing applies to speakers - you can set up as many as you’d like, but the demo room that we were in had two speakers. They were on each side on the TV, and were loud enough for the entire room.

The final and most interesting piece of the video conferencing setup was Logitech Tap, which is a custom device with a wedge shape and touchscreen on top. This device easily allows you to create or join meetings without the need for a PC. You can set the Tap up as a room under Office 365, which doesn’t require any additional licenses for it.

We were given a quick demo on how easy it was to set up or join a meeting, and it was quite refreshing to see how smoothly and quickly everything worked. There was no back and forth between “can you hear us?” or “can you see us?” that precedes most meetings. Logitech estimates that 8-10 minutes are lost prior to every online meeting in getting tech to work.

Tap is also expected to plug into automating lighting, climate, and blinds for your room, so a simple tab will close your blinds, turn on all your lights or change the temperature right from its screen.

The Logitech Tap and the rest of its ecosystem wants to take the pain out of voice and video conferencing. Setup can be as simple as just installing one unit or a complicated and expensive affair based on your needs.

Pricing starts at USD$4,000 and goes up depending on your exact requirement.