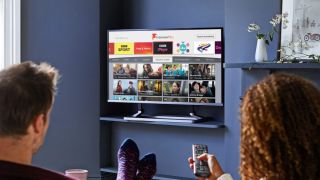 What is Freeview Play? If you live in the UK then there’s a good chance you’ll be familiar with Freeview, the UK’s free-to-air digital broadcaster.

That's right! Free! Unlike the paid-for subscription services out there – Netflix, Disney Plus, and the likes – Freeview Play offers a portal to UK television programming without you having to spend a penny.

The joint venture between the UK's biggest broadcasters was, when it launched in 2002, the only way to access digital television without paying a monthly subscription for cable or satellite.

16 years later, though, the landscape is quite different – and while the platform is still going strong the focus is less about getting people access to digital television (which is now the only option after analogue was switched off in 2012), but more about making it easier to get people access to video on-demand services via the Freeview Play platform.

It seems to be working, with sales of Freeview Play devices exceeding five million in the UK in 2018, and 2019 closing with nearly 7 million users.

With a new smartphone app, too, users now have the option to browse over 20,000 hours of on demand content on the go (or just when the TV remote is out of reach).

In essence Freeview Play’s aim is to allow you to access all of the on-demand broadcast content you could possibly want without having to search through separate apps to find them. It’s all there, contained within the same TV guide.

Here’s how it all works.

Start with the guide

The centre of the Freeview Play ecosystem is the same TV guide (or Electronic Program Guide - EPG) that you’ve been using for years. You can scroll forward to see what’s coming up just like you could with Freeview traditionally, but what’s different with Freeview Play is that you can also scroll backwards.

Scrolling backwards allows you to stream programs over the internet via catch-up services, although exactly how the interface is laid out will vary depending on what piece of hardware you’re using (more on that later).

For example, on the 2017 model Panasonic television we were using, each day is listed in columns, allowing you to scroll back horizontally to quickly cover multiple days. You then scroll up and down to pick the particular program you want to watch.

However, depending on the manufacturer of the hardware you’re using the interface could work much differently, instead allowing you to scroll through programs by going left and right, and scroll through different channels by heading up and down.

Although catch-up services like iPlayer currently allow you to quickly and easily restart a program that’s currently running, this functionality isn’t available through Freeview Play. However, the Freeview team told me it was a feature they’d be very interested in implementing in the future.

According to the Freeview team, Play currently allows access to the vast majority of the most-watched shows in Britain. BBC, ITV and Channel 4, Channel 5 are on board, and more recently UKTV’s suite of channels were added, allowing access to UKTV Gold and Dave, amongst others.

Ideally it would be great to see the service cover 100% of TV in the country, but the realities of the Pay TV market mean this is unlikely to ever be the case.

Although Freeview Play is aiming to present a clean unified experience, it ultimately relies on catch-up services to provide its functionality. This means that when you scroll back through your EPG and select a program, it will then launch its own catch-up service to begin playing it.

While this means that you still get the same great iPlayer service through Play, it does mean that there are some unfortunate blind spots in programming.

You’re probably familiar with occasions when the BBC might show a popular movie on one of its channels, only to have it never appear on its catch-up services. While this is easy to overlook while looking at iPlayer through its usual interface, the way Freeview Play lays out its programming chronologically makes these blind spots a little more obvious.

You’re not missing out on content that’s available to stream for free elsewhere, but it’s a problem that could cause some confusion for people in your household.

A lot depends on manufacturers

We’ve explored this above with the way different program guides are laid out, but because Freeview Play is a platform rather than a single piece of software, the experience can vary a lot between different pieces of hardware and different manufacturers.

With 19 out of the top 20 manufacturers now supporting Freeview Play, that’s a lot of differentiation.

For the most part these differences amount to simple changes like appearance and the way different sections are laid out, but sometimes they can be a little more fundamental.

For example, certain televisions and set-top boxes give you the ability to record upcoming programs to either a built-in hard drive or an attached USB stick, but this is functionality that’s been built on top of Freeview Play, rather than being offered by the platform itself.

So although Freeview Play is a solid piece of software, how well it performs will ultimately depend on the hardware it’s installed on, and you should always look for specific reviews of the hardware in question rather than simply relying on the inclusion of 4K.

Beyond the EPG, Freeview Play will also make attempts to introduce you to content you might not be immediately familiar with via its Freeview Explore section.

Here you’ll find curated lists of programs sorted by genre, which Freeview hopes will allow you to find new stuff to watch, even if it’s on a channel that you wouldn’t normally frequent.

However, if you want to find some content you’re already familiar with, then Freeview also has extensive search functionality built in to allow you to find it as quickly and easily as possible, regardless of what channel it’s on.

When we searched for a show that we knew was available across multiple channels, Freeview Play certainly found all instances of the show, but it was a little random with how it displayed this information. It shouldn’t be a problem for most shows, but if you’re trying to find some Great British Bake Off to watch, then the amount of re-runs being shown across different channels might confuse the software.

The world of television has gone through some pretty big changes recently, with the move towards streaming services and away from traditional broadcast television, and more recently the introduction of new technologies such as Ultra HD and HDR.

Thankfully, Freeview Play is a constantly evolving platform, which will allow it to embrace these new technologies as and when they become available. We’ve already heard that Freeview is interested in integrating the ability to restart a live program, but there’s a lot more to come.

The catch, as above, is that this will rely upon broadcasters to start supporting them, and manufacturers to update their hardware.

Initial signs seem good however. Freeview Play has been equipped to deal with 4K since its inception, and the platform has supported for the broadcast-ready HDR standard Hybrid Log Gamma since 2017.

When broadcasters eventually start making use of these new standards, you can be certain Freeview Play won’t be far behind.

Jon Porter made original contributions to this article.