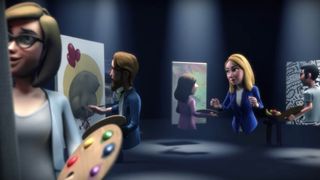 Facebook Horizon is a social VR hub looking to suck up even more of your time into virtual reality next year.

With more than a dose of the massive VR world in the book and 2018 movie Ready Player One, Facebook Horizon will be a social network that operates eantirely in VR for those using Oculus Rift and Oculus Quest headsets.

While we haven't got a hands on look yet, we're told users will be able to "make their own games and worlds", with "expressive and diverse avatars" used to navigate the VR world – according to Facebook CEO Mark Zuckerberg.

Facebook Horizon was announced at the Oculus Connect 6 conference in San Jose, California on September 25-26 this year, and is set to launch sometime in 2020. You can see an introductory reveal trailer below.

While there isn't much in the way of specific details, the trailer above shows off avatars flying planes, painting in VR, and hugging little pink cubes, for some reason.

Apparently, there will be a stress on creation tools, and we could see Facebook try to attract fans of games like Minecraft – the highest selling game of all time – wanting to use new VR tools to make and shape the world around them.

"You don't need to be able to code to create something," says Zuckerberg, "though that can certainly help when making some of the more advanced things. "It's just another step towards building the kind of social infrastructure that we believe will be increasingly important for the future.”