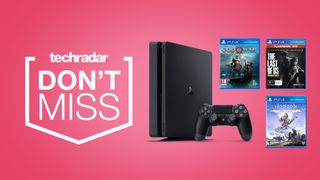 If you've been holding out on the massive range of exclusives lining the PlayStation library, this PS4 Slim deal might just be the bundle for you. This PS4 bundle sends you home with a Slim console and three of the system's best games for just $249 this week. That's a fantastic price considering you're spending $50 less than the price of the console by itself and picking up $60 worth of games at the same time.

This cheap PS4 Slim deal has been kicking around on store shelves for a few weeks now, after dropping even further in price after the seasonal sales. That means there's still time to pick up a fantastic cheap PS4 deal, but we are seeing it steadily hike back up in price. You might need to act quick to secure your bundle this weekend. You're also picking up copies of Horizon Zero Dawn: Complete Edition, God of War, and The Last of Us Remastered - three PlayStation hits guaranteed to give you a warm welcome to the system if you're a first-timer.

In case you hadn't heard, the original PS4 is out. In its place, we have the PS4 Slim, a redesigned console offering a sleeker design while maintaining the same internal specs. While it doesn't offer the 4K scale of the PS4 Pro, it's available for a fantastic price with some truly great games this week. This console usually goes for $299.99 by itself on a good day, so grabbing three top-quality titles for $50 less than the going rate will set you up well for 2020 gaming.

Not in the US? Scroll down for more PS4 Slim bundle deals near you.

PS4 Slim 1TB | God of War, The Last of Us: Remastered, Horizon Zero Dawn: Complete Edition | $249 at Amazon
Pick up a massive 1TB PS4 Slim deal for $50 less than the usual console price and take home some of the best exclusive games in one fell swoop. That's a win in our deal-hunting books.
View Deal

Got your eye on other games? Check out our full range of the latest PS4 bundles right here on TechRadar. You can also find some fantastic PS Plus deals if you know where to look (and we do). Or, if you're shopping around a bit more for your next console, you might want to take a look at our best Xbox One deals going.