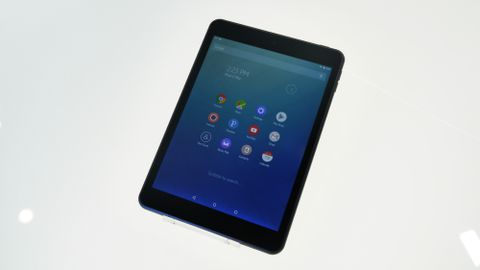 A surprisingly desirable Android tablet from a firm you wouldn't necessarily associate such a device with.

No need to pinch yourself, you're reading that right, a Nokia Android tablet that's actually rather good.

The Nokia N1 launched last year in China, and sightings of the Finnish firm's Android slate have been hard to come buy outside of the country, but at MWC 2015 I managed to clasp my hands round it.

In short, I'm a little bit in love. It's got a beautifully slender profile, unibody aluminium shell and an eye catching display, plus it's been recently updated to Android Lollipop.

Sure it bears more than a passing resemblance to the iPad Mini, but that's not necessarily a bad thing, and its curved edges and rounded corners sit nicely in the hand.

The power/lock key in the top right corner and the volume keys on the right side of the N1 are distinctly Apple in placement, as is the 8MP rear facing camera - but it all works.

With a 7.9-inch display the Nokia N1 is easy to manage in the hands, and I was able to hit the physical keys without issue.

It's also just 6.9mm thick, making it easy to slip in a bag and at 318g you won't really notice it's in there. The Nokia N1 may be thin, but it feels solid and well made - I can't see this slate easily bending.

A speedy interface comes courtesy of a 2.3GHz Intel Atom processor and Nokia's own Z launcher, an overlay on Android Lollipop that's been available to download on all Android smartphones for a while.

If you're used to stock Android it will take a little get used to, but Nokia is all about simplicity these days and that's evident in the functionality of the N1.

There's 2GB of RAM on board as well, and I was able to quickly open apps and scroll through the interface.

Z Launcher displays what it thinks are the most relevant apps - dependent on time of day, location and frequency of use - in a grid on your homescreen.

If the app you require isn't in the grid, just trace the first letter of its name and the N1 will search for apps starting with it and order the results in what it believes to be the most likely options you're looking for.

You can browse all the apps on the N1 by sliding your finger from the edge of the display on the right into the centre of the screen.

If you really don't like Z Launcher you can always disable it and return to the stock Android experience, giving you the best of both worlds.

When the Nokia N1 launched it China it wasn't part of Google's official devices, so it was missing the search giant's applications and functions, but since it has been approved by the big G.

That means if/when the N1 launches in other regions you'll get access to the Play Store as well as the likes of Gmail, Maps and Hangouts.

Just above the display is a 5MP front facing snapper, to compliment the 8MP option on the rear, which should be great for video calls.

Inside you get 32GB of internal storage, but there's no expandable storage option. That's not a huge issue, but power users may be disappointed to find a lack of 64GB and 128GB versions.

The Nokia N1 is also only available as a Wi-Fi only tablet, so anyone looking for a tablet with data on the go will be out of luck here.

There's an interesting feature on the base of the N1, with a centralised microUSB port with uses the latest connection type - USB Type-C - flanked by sizeable speaker grills.

That means this is a reversible port, allowing you to plug in your charging cable any way round - much like Apple's Lightning port. No more fumbling around in the dark as you try and work out which way round the charging cable goes. Hurray!

The port is tasked with charging the N1's 5300mAh battery, which should hopefully give you a decent amount of life although you'll have to wait for our in-depth review to find out.

The Nokia N1 will come to more markets in 2015, but which ones exactly is still anyone's guess. In terms of price we're still a little in the dark, but the hope is it'll be cheaper than the iPad Mini 3.

If you're looking for a portable, well built and dare I say stylish Android tablet then the Nokia N1 is probably the best around. I want one, I just wish I could get hold of one.