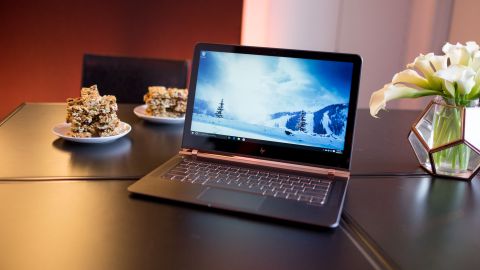 The HP Spectre claims the title of the 'world's thinnest laptop,' but the real story here is its impressive design and top-notch specs.

Ever since HP released the Spectre x360 the company has been clearly putting a greater emphasis on design and top-of-the-line materials. It's evident that this philosophy has come to all of HP's machines, from the thinning Envy line to even its budget Pavilion line, which are now painted with a tennis shoe-inspired design.

Now HP has released the Spectre, its most luxurious laptop yet, complete with gold bling and carbon fiber. The 13-inch Ultrabook also claims to be the world's thinnest notebook, while being the first laptop of this thinness (0.41 inches) to offer Intel Core i5 and i7 processors – a step up from the Intel Core M-powered MacBook.

While the HP Spectre is a looker, and substantial on the inside, it's not quite a home run for the storied PC maker.

Measuring in at 0.41 inches, HP Spectre is about as thick as a fluffy pancake, and it feels just as light despite weighing 2.24 pounds. Thanks to its broad 12.8 by 9.03-inches frame, the Ultrabook feels like it has the airy density of a wafer.

However, as a consequence of the laptop's wider footprint, we find the Spectre is sometimes a tight squeeze even with bags and sleeves designed for a 13-inch machine.

Dimensions aside, the HP Spectre is a downright stunner. Instead of being another cookie cutter, silver and black Ultrabook, this 13-inch machine features a gold-on-black color scheme.

While gold on any type of device might seem gaudy, the gilded material adds a contrasting accent to the Spectre's dark finish. There's a golden panel that sits at the rear and defines the machine's thickest point. Gold is also sparingly used for HP's edgy new logo and a pair of specially designed hinges.

Thankfully, HP also went with a polished and redder shade of gold, rather than a champagne or rose gold treatment as seen on the MacBook and Asus ZenBook 3. Unfortunately, the mirrored finish easily picks up fingerprints, and looks absolutely gross after just a few moments of handling.

You might notice the Spectre casts a very similar silhouette to other ultra-thin laptops, like the Dell Adamo, with a skinny base and thicker backside to accommodate ports and cooling.

However, this 13-inch Ultrabook is more curvaceous, thanks to its rounded back corners. And, while it's thick enough to accommodate a full-sized USB port, users are only left with three USB-C ports – only two of which support video, data and charging.

Aside from the extra golden touches, it's clear HP went back to the drawing board to redesign a ton of elements for the Spectre.

For starters, the Spectre's 13-inch screen doesn't sit on a traditional laptop hinge. Instead, it hovers over the keyboard base, held up by two crescent-shaped strips that magically tuck into the Ultrabook's svelte form. HP calls this its 'piston hinge,' and it's a slick mechanism that glides closed and holds the display steadily in place.

Unfortunately, one limitation of the piston hinge is you can only push the screen back to a roughly 120-degree angle. So, it's not as flexible as other Ultrabooks, including HP's own EliteBook Folio G1, which lets you tilt the screen back a full 180-degrees.

The bulk of the Spectre's chassis is made up of CNC cut aluminum, but to help reduce weight, HP went with a carbon fiber underside. However, without knowing that, you probably wouldn't notice the difference. The woven filament feels just as rigid and has nearly the same finish as the metal. Another plus side of the carbon fiber is it radiates less heat onto your lap than aluminum would.

HP has basically injected style into every element it could find, including the fractal pattern found on the speaker grills. On the machine's underside, you'll even find the intake and exhaust vents have been arranged into a symmetrical "V" shape.