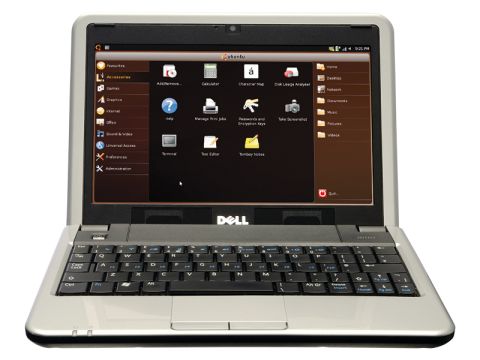 The Mini 9 is nicely portable, though this takes its toll on the size of the keyboard

A well-designed, silent machine with a fast SSD, but with poor Wi-Fi reception and a cramped keyboard

Can a netbook really be silent? Well, the Dell Mini 9 doesn't include a hard drive and it's also entirely passively cooled.

This is quite a feat given that it has the same CPU as the Asus Eee 1000, and that laptop is a loud beast at times. Still, the downside to this is that the machine gets quite hot underneath when the CPU is stressed.

The Mini 9 is not adorned with extra fancy metal rims like the Eee or Aspire One A110. The top of the lid is a haven for fingerprints, while the screen is highly glossy and reflective, which may give you some grief if you're working outdoors.

On the left-hand side you'll find the Kensington lock, power plug, two USB ports and the SD/MMC card slot; the right side is home to the headphone/microphone jack, another USB port, a surprisingly small air vent, VGA out and Ethernet.

Dell has made some brave decisions here, most notably removing the Fx keys from their usual habitat of the top of the keyboard. Instead you have to press Fn+A to the semicolon key on the keyboard, which requires some mental retraining.

Another oddity is the right-hand Shift key, which is two keys in from the left, past the back tick (') key and up cursor key. But these things aside, the keyboard is quiet and robust, with keys of the same width as those on the Toshiba NB100, but with extra height that makes it considerably more usable.

The trackpad is good too, reaching right up to the keyboard. Dell ships the Mini 9 with Ubuntu 8.04 LTS, and Netbook Remix 9.04 ran like a charm on the machine, with the snappy SSD giving it the second-fastest boot time in our benchmarks.

Battery life is good too, though the Wi-Fi reception was quite weak, reporting only a 40% signal strength where others would get 70% upwards. Still, for £228 it's good value, and you can knock that down to £199 if you omit the webcam.