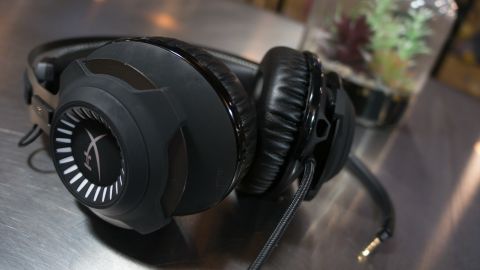 The HyperX Cloud Revolver S headset performs as admirably outside of games as it does in them. With a great build and comfort, it’s easily a headset worth having.

The Cloud Revolver S has 7.1 channel surround sound, thanks to Dolby digital signal processing, which makes this headset one of the best PC gaming headsets, aimed at full immersion and total situational awareness.

If you look at the HyperX Cloud Revolver S and how it compares to similar products like the $99 (£89, AU$169) Creative Sound BlasterX H7 Tournament Edition and the $99 (£109, AU$159) Corsair Void Pro RGB – it’s more expensive, while offering the same game-oriented 7.1 channel surround. However, there are always deals out there that should make the HyperX Cloud Revolver S a more palatable expense.

As you’ll see, other than some minor problems, the HyperX Cloud Revolver S headset really proves itself in every way we could think to challenge it.

The aesthetic of the HyperX Cloud Revolver S is pretty and not overly “gamery.” A few points hint at its gaming nature, but they’re subtle. With the microphone removed, only the “HX” logo indicating HyperX on both ear cups really shouts “gaming.”

The black and white color scheme isn’t dramatic, with black being most prominent and white only showing up as minor accents on the ear cups and threaded into the headband. Red LEDs, meanwhile, only make an appearance on the USB control box, and they aren’t glaring.

The physical build of the HyperX Cloud Revolver S is even more impressive. The headset is built around a smooth, steel frame that’s pleasing to the touch and eyes. It allows for a flexible and robust feel. Now, metal frames have a reputation for allowing in some noise if brushed or tapped, but a pair of rubber dampers help minimize the reverberation. Matte plastic ear cups attach to the steel frame and pivot a few degrees in each direction and the headband slides freely for automatic adjustment to fit a user’s head.

The headband and earpads are covered in leather-like “leatherette” pads full of lush memory foam that offer comfort for hours on end and justify the use of “Cloud” in the headset’s name. We’ve worn plenty of lighter headsets and headphones that felt infinitely more uncomfortable. The earpads make a wide loop, to comfortably fit large ears and spread out the clamping pressure to the point of being negligible.

The microphone is one of the few weak points in the design. It plugs into the HyperX Cloud Revolver S via a 3.5mm jack at the bottom of the left headphone. It’s thick, bendable, and feels durable with no exposed mesh to worry about ripping.

The issue is that it likes to rebound a bit from where it’s positioned if it’s bent very far. It’s not like a contortionist that will bend and stay in whatever position you put it. It’s also a shame the microphone can’t dock itself into the headset when not in use, but the added bulk probably would not have been worth it.

However, the HyperX Cloud Revolver S adds some convenience with the mic, with a breakout cable that splits the microphone and headphone audio into dual 3.5mm jacks. However, this added convenience will lose Dolby virtual surround support, as it doesn’t use a USB connection.

The HyperX Cloud Revolver S uses braided cables that are somewhat rigid. From the headphones, the first length of cable is about three feet, which is a manageable length to reach the USB control panel. The panel has a clip on it that seems intended for attaching to a pocket or belt.

From there, the cable gets a bit insane at roughly eight feet in length. If you’re close to your computer, the cable can feel excessive. But, since it’s compatible with consoles where you might be sitting further away, having the extra reach and not needing it is better than not having it when needed.

All of this cable flexibility means that it’s compatible with plenty of platforms. It can connect to PS4 Pro, PC and any other devices that support USB sound using the included USB dongle. A simple 3-pole 3.5mm jack also lets it plug into any other device, whether it’s your smartphone or your Xbox One X.

If you think we haven’t gushed enough about the design of the headset, don’t worry. The HyperX Cloud Revolver S performance is similarly laudable.

Setup is a breeze. Kingston says ‘Plug N Play’ and the HyperX Cloud Revolver S really follows through. No hunt for drivers,no required software to manage sound profiles. We plugged the USB device in, punched the button on the dongle to activate Dolby’s digital signal processor and – just like that we were ready to go.

The 50mm drivers pack a punch while keeping sound clarity intact. We cranked up games to the point where explosions were more than a little jarring, and everything still sounded crisp and clean. The HyperX Cloud Revolver S doesn’t muddle high hats or bass lines, and produces clean mid-tones.

The Dolby DSP introduces some noise, but the noise-to-signal ratio is good, and the interference  is quickly covered up. The only times we really noticed it was listening to music that started quiet, with little more than a single note played at a time.

On the note of music, the HyperX Cloud Revolver S is quirky but fun. With everything set to normal, the headphones are fine for music. The in-line control panel offers three equalizer presets: a bass boost and a flat or vocal EQ. The bass is nice enough, but we didn’t find much use for the flat and vocal EQ options. We did, however, try kicking on the Dolby DSP while listening to music, and it was a blast.

The Dolby digital signal processing may introduce noise, but it also spreads out all the elements in the song, so you feel surrounded by them, lending an almost live feel. Al, John and Paco sounded like they were sitting around us franticly picking and tapping their guitars. Of Montreal’s Kevin Barnes shouting, “come on, chemicals,” from all around was amazing.

There’s a tinge of echo that purist audiophiles may hate, but it also offers some novelty to songs we’ve heard hundreds of times. Eddie Hazel’s solo in Funkadelic’s Maggot Brain can just about take you to a different dimension even with crap headphones, so it blew our minds all over again while listening with the HyperX Cloud Revolver S and the Dolby DSP switched on.

The atmospherics offered in music carried over to video content as well. We tested this out with a bit of Wonder Woman and Dunkirk. Naturally, Dunkirk was intense, with every gunshot rattling us. What stood out most were the minor background sounds, like the sound of birds and other background elements we didn’t notice before. By spreading out the elements, the environments are that much more compelling.

Of course, all of that is just icing on the cake. Video game performance is what it’s all about, and the HyperX Cloud Revolver S doesn’t disappoint. To put it bluntly, no, the virtual 7.1-channel surround sound didn’t make it possible for us to precisely pinpoint a footstep at our 8 o’clock so we could whirl around and surprise sneaky adversaries with a quick headshot. But, it still offers solid spatial sound that can help immensely in games.

Because the Dolby DSP does such a good job of spreading out sounds, it’s easy to distinguish sounds even in clamorous environments. We were defending the end of King’s Row in Overwatch, and though the payload was nearby and busy with combat, we could head the loud footsteps of an enemy Reaper, get a general idea of where he was (sure enough, he was lurking on the balcony above), and we could warn our teammates in time to avoid a nasty surprise.

We also tested the HyperX Cloud Revolver S in Rainbow Six Siege and Battlefield One. In Rainbow Six, sound cues can go a long way to staying alive and winning the game, and the HyperX Cloud Revolver S was no slouch at keeping us aware of our surroundings. In Battlefield One, the surround sound helped pull us into the environment, making us feel like we were that much deeper in the mud with snipers popping shots from the tower on our right, and some jerk tossing flame grenades up ahead of us.

The microphone, despite its finicky flexibility, is a solid choice for gaming. Kingston boasts its TeamSpeak and Discord certification, and we were pleased with it, too. None of our teammates ever barked, “your mic is cancer,” while playing with us. The noise-cancelling proved effective in a bevy of tests. In our worst test environment, a noisy cafe with music on, most of the sound was reduced, with only the occasional sound of clinking glass coming through.

Background noise was easily overpowered by our own voice in the microphone. There’s definitely a sweet spot for the mic though. Too close and your breath will sound like a strong gust. Too far and it goes faint. Serious gamers or streamers with a dedicated microphone can take the microphone off and forget about it (or find some other use for it).

The HyperX Cloud Revolver S is an all around impressive headset geared for gaming but ready to do so much more. The 7.1-channel surround sound offered through the Dolby DSP creates a wide soundstage that’s useful in games and immerses you in movies and music. All the while, the sound quality dazzles all the way from bass through to treble.

Sure, the microphone isn’t the most flexible or easy to stow away we’ve ever used, but the sound is crisp and handles the job of keeping teammates informed in competitive games. And, yes, the price is a bit higher than plenty of other headsets offering 7.1-channel surround, but when it comes to the whole package, the HyperX Cloud Revolver S is easily worth every cent.