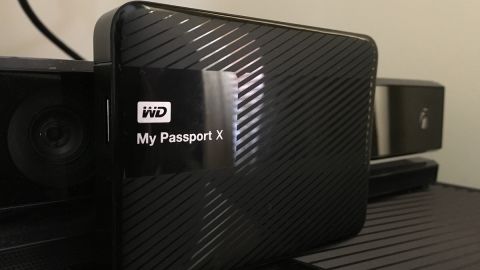 A slightly pricey option for 2TB, but WD's Passport X is a convenient and simple storage solution for Xbox One users wanting more space for game installs.

The PS4 and and Xbox One have some major differences, but perhaps none so much as how they deal with storage limitations.

While Sony lets users easily replace their internal hard drives (if you want to know how, read our how to change your PS4 hard drive tutorial), Microsoft locked down its console, instead allowing users to plug in external storage for extra space.

There's a lot to like about this strategy, especially given the sheer size of this generation's game installs. Being able to install more than just a handful of titles without deleting older games is an extremely useful addition to a console.

It's also the incentive for products like the WD My Passport X. This 2TB hard drive is designed to be plugged into the back of an Xbox One and forgotten about, while boosting the number of games you can install on your console by a significant margin.

Of course, there's nothing stopping you from plugging in any number of regular external drives to the Xbox One for additional storage space – and in most cases that's probably going to be the cheaper option.

Pretty much any USB 2.0 device will let you stream video and music through the console, while USB 3.0 drives offer the ability to store games on an external drive.

But while many drives can work with the Xbox One, the My Passport X is designed to match the console's gaming aesthetic as well as guaranteeing compatibility.

The black plastic case is clearly designed as an homage to the latest Xbox console, with diagonal black lines matching the top of the Microsoft box, although WD's version is still fairly smooth to touch.

The USB 3.0 drive means that the only interface on the entire case is a port for the USB plug. The My Passport X gets all its power from the Xbox itself, so there's no need to plug in an external power supply.

The supplied cable is fairly short, measuring in at about 50cm. While that may sound like a negative, in this case it actually makes a lot of sense – you'll plug the My Passport X into your Xbox One and generally leave it there, so it doesn't need a long cable to connect.

Once plugged in, a pinprick white LED illuminates to acknowledge that the drive in in use.

The actual setup of the My Passport X drive is as simple as you could want it. Plug the drive into one of the Xbox One's USB ports on the back, and follow the on-screen prompts. It's worth noting that the drive isn't pre-formatted for the Xbox One, so if you just like the looks of it as a portable storage drive, you can plug it into your PC and copy files.

Once you do plug it into the Xbox One the first time, you'll have the chance to reformat the drive to store Xbox One games. After you've formatted though, it will only be available for Xbox One games.

From there, you can either copy or move games stored on your internal hard drive to the My Passport X from the Manage Game menu on the Xbox console.

That process is probably a tad convoluted, but that's more a failing of Microsoft's UI than the hard drive itself.

Copying speeds are respectable. We moved Titanfall and all its DLC (which added up to 25.4GB) over to the My Passport X in about 23 minutes.

Installing Forza 5 directly to the drive itself took 32 minutes and 17 seconds compared to 33 minutes 20 seconds installing it to the Xbox One's internal storage. Obviously those numbers are fairly close, but it was nice to see the My Passport X edge out the smaller capacity internal drive.

Booting up that same game from the hard drive was also ever so slightly slower, taking 30 seconds compared to the internal hard drive's 29 seconds.

Given the extra 2 terabytes will let you store as many as 50 extra games to your console before you need to think about deleting them to free up storage space, that performance dip is hardly a deal-breaker.

It may not be the cheapest USB 3.0 hard drive you can get, but there's a lot to like about the My Passport X.

The budget conscious will probably want to save their coins and get a cheaper USB 3.0-compatible external hard drive. It's definitely nice that the My Passport X matches the Xbox One's stylings, but you will ultimately leave it plugged in and hidden behind the console anyway, so styling probably doesn't matter.

Plug it in, follow the prompts and you're on your way. There's no worrying about external power supplies, no challenges with complex UIs – this thing is simplicity itself to use.

More likeable is the fact that there's no noticeable performance drop when compared to the internal hard drive.

Booting a game from the My Passport X was comparable to booting it from the internal option, while installing the game was similarly timed.

Having that performance maintain while increasing the number of games you can keep stored is a great feature, and something all Xbox One users should probably take advantage of.

A relatively short list here. Firstly, the process of managing games is ever so slightly convoluted – moving games between hard drives requires a couple of steps.

For the pure simplicity of the drive itself, and the fact there's no significant drop in performance, the My Passport X is a solid investment for any Xbox One user desperate for more HDD storage.

Which, frankly, should be pretty much every Xbox One owner. With game installs coming in at 30GB and above, 500GB is a miserly amount, and multiplying that capacity by a factor of four is a great way to get the most out of your console.