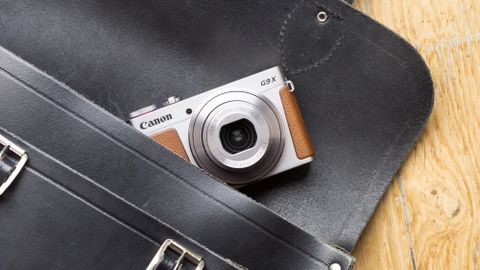 The G9 X delivers great image quality and shows it is possible to cram a bigger sensor into a smaller body. The reliance on touch-screen control won't suit everyone, though, and the zoom range is modest.

It's every keen photographer's dream – a camera with a decent sized sensor that's still small enough to carry around everywhere. The G9 X has a 1-inch sensor, a comparatively new type that's four times larger than the 1/2.3-inch sensors in point-and-shoot cameras and more twice the size of the 1/1.7-inch sensors in older high-end compacts – including Canon's own highly regarded PowerShot S120.

Remarkably, the G9 X is barely larger than the S120, itself considered in its time to be a brilliant bit of miniaturization.

There are other compact cameras with 1-inch sensors on the market, and Sony's RX100 range is one of the most widely known – the latest version is the Sony RX100 Mark IV. There's also Canon's own G3 X, G7 X and G5 X – the same sensor is shared across all four models. However, it's only really the G9X which is properly pocketable.

Sacrifices come with such extreme pocketability of course, and although the G9 X has impressive sensor and processor specs (20 million pixels coupled with a DIGIC 6 processor), there's no viewfinder and no tilting or articulating screen.

The lens is also a bit of a trade-off too. While the G7 X has a 4x optical zoom which offers a focal length of 24-100mm (equivalent), with maximum apertures of f/1.8-f/2.8, the G9 X only offers a 3x zoom (28-84mm equivalent), and has a maximum aperture of f/2.0-f/4.9. While the wide end is still useful for creating shallow depth of field effects and in low light, it's not quite as flexible as the G7 X's lens at longer focal lengths.

On the plus side, the three-inch screen is touch sensitive, and there's inbuilt Wi-Fi and NFC technology. As with the other cameras in the G range, there are manual and semi-automatic exposure modes, along with automated options, as well as the ability to shoot in raw format.

With a sleek and stylish chassis, the G9 X is reminiscent of the older and very popular Canon S120. You can easily fit it into a jeans or jacket pocket – it is noticeably slimmer than the PowerShot G7 X, as well as other one-inch type cameras, such as the Sony RX100 Mark III.

The front of the camera features a textured covering which looks pleasing but also helps to make it feel secure in your grip. The top of the camera has an mode dial to quickly switch between the various exposure modes, such as the manual and semi-automatic modes, as well as the automatic and creative options.

There are very few buttons on the body of the camera; instead, most operations are carried out via the rear touchscreen. If you're not a fan of touch operation then this probably isn't the camera for you.

There are just four buttons on the back of the camera, including a 'Q' button which accesses a quick menu for commonly used settings like white balance or metering, but it would perhaps be nice if you could customise the options. This Q button has a touchscreen counterpart which you can use instead if you prefer.

There's direct access to certain settings on the screen itself, such as ISO (sensitivity), exposure compensation, aperture and/or shutter speed. A control ring around the lens can also be used to set certain parameters – you can choose which ones in the main menu or tap a setting on screen first and use the dial to make the adjustment. The autofocus point is set by a tap on the screen too.

There are no directional buttons on the camera and menu navigation and setting selection is done entirely by touch. This takes a little bit of getting used to at first if you're used to a conventional camera. It feels a bit more natural in the age of the button-free smartphone, but working your way through eight pages of menu options without physical buttons can be laborious.

There is a button for starting up the Wi-Fi connection, but it's on the side of the camera and easy to miss. After connecting to the network which the camera creates, you can launch the free Canon CameraWindow app (available for iOS and Android) on your smart device and both download shots you've taken and control the camera remotely.