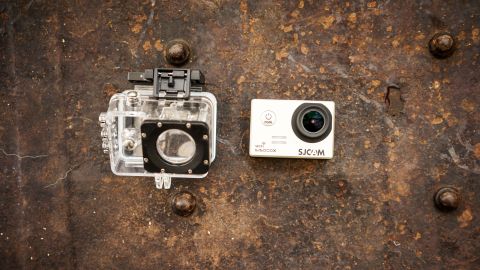 The market for budget feature packed action cameras is growing and there are plenty of very capable cameras out there for the SJ5000X to compete against. It packs in more features than many, though, including Wi-Fi and 120fps at 720p resolution, and these make it very appealing. If you're looking for a budget camera then this is a good solid choice but if you're into sports where the camera is likely to get dirty then it's worth looking at an alternative without the bolt style case.

4K video has been one of the big selling points for the premium GoPro Hero Black series, but now 4K is appearing in the latest batch of budget action cameras, including the SJCAM SJ5000X.

This ultra high resolution footage is just one of a string of features that until recently was uncommon in a camera of this price. Other features include Wi-Fi, cycle recording, image stabilization, motion detection recording and modes that enable it to be used as a dashboard video camera.

Video resolution and frame rates are key to the success of an action camera and as well as 4K at 24fps the camera offers 2k at 30fps, 1080p at 60fps and 720 at 120fps giving you plenty of scope. The footage is captured on a Sony Exmor 1/2.3in CMOS sensor with 12.4 million pixels, a similar sensor to the one that appeared in the superb iSAW Edge.

The SJ5000X looks like the GoPro Hero series of cameras, with a removable 30m waterproof housing that is secured by a compression lever lock. The case is similar to the older styled GoPro Standard waterproof housing. When placed side-by-side against the Hero4 case, it is larger in all dimensions especially depth. The case also features the old safety lock design that makes the case impossible to open accidentally, and even when you purposely try to release the lock it can be tricky. The lens features the screwed in cover design rather than the newer smooth case design of the latest GoPro's. Although this makes clipping filters on very easy, it does become a dirt trap in muddy conditions.

The control buttons around the case are again similar to the old GoPro style, but here there are five in total which means that the actual surface area for the button is quite small. However, the design of the buttons is well executed and even in cold conditions wearing gloves it's easy enough to select the option you want.

On the base of the case is the familiar GoPro style mount, which means that the camera can easily be mounted on the majority of existing GoPro mounts.

Removed from the waterproof housing, the design similarities between the SJ5000X and GoPro continue with a mode button on the front, shutter button on top and on the side three buttons that activate the Wi-Fi and image stabilizer followed by up and down navigation buttons. On the opposite side are the USB port for charging or connecting to a computer, Micro SD card slot for storing footage and an HDMI port for plugging directly into your TV. The 900mAh battery supplies around an hour and a half of use and is accessed through a hatch in the base of the camera.

The back of the camera features a 2-inch LCD screen which is bright, clear and crisp and fine for viewing when composing a shot, reviewing footage or navigating menus.

The overall quality of the case is good and it feels solid and built to withstand a good few knocks. A direct comparison with the GoPro does show that the quality of finish for the plastic for both the case and camera isn't quite as high, but then again the price is considerably lower.

Navigation through settings is easy enough and the two navigation buttons on the side of the camera make it easy to find your way around.