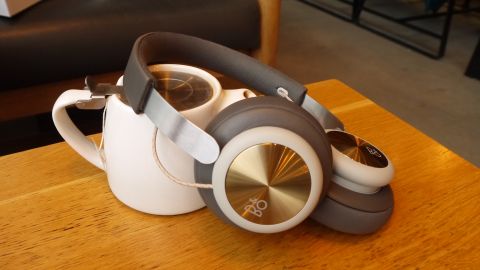 With a sound signature that's consciously going after the bass-lovers out there, we weren't expecting to like the sound of the BeoPlay H4 headphones as much as we did. Certainly it's a sound that suits some genres more than others, but otherwise this appears to be an adept pair of headphones, reservations about its controls notwithstanding.

If you're after a set of headphones that are as much a fashion statement as they are an audio product, most these days would turn to Beats, despite the sometimes-patchy reputation they hold among audiophiles. Bang & Olufsen are looking to muscle in on that space, but to do so with a far greater emphasis on audio performance.

The BeoPlay H4 headphones are the brand’s cheapest over-ear options and, while still having to accept a few compromises, offer a performance at least as good as you'd find from Beats, if not more impressive.

For an entry-level model, they do however retain a somewhat higher price tag than you'd expect against the competition But those that have been tempted by the stylish design of BeoPlay’s previous headphones, not to mention the truly premium price tags the rest of the range commands, will find lots to enjoy here.

The BeoPlay H4 follow a very similar design aesthetic to the rest of the BeoPlay lineup.

Each earcup has a single disc of anodised aluminium, adorned with the B&O logo on each.

Underneath each aluminium disc you’ve got a fairly large memory foam cushion, covered in leather.

This leather is lambskin, which feels great against your ears, and contributes to the headphones feeling comfortable for the time we were able to use them for.

Although the H4s are a very compact pair of headphones, the earcups successfully fit entirely over our ears, and where they made contact the soft leather meant that they still felt comfortable.

With this contact there’s a danger that over long periods the headphones might become warm and clammy, but we’ll have to test them more extensively to determine whether this is the case.

On the underside of the right earcup is where you’ll find the headphones’ control buttons. B&O has erred on the simpler side for its control scheme, opting to use just a single button for both track control, paring, and turning the headphones on and off.

A long-press of this button turns the headphones on and off, while shorter taps should pause, resume and skip your tracks. We’re concerned that this has the potential to lead to confusion, as you accidentally turn the headphones off rather than pausing your music by holding the button for too long, but this is something we’ll have to test further.

One other faux-pas we found was the absence of NFC, which meant that the headphones are a bit trickier to pair to a phone than we would have liked.

A final design point is the exposed wiring that connects the earcups to the headband, itself covered in the same lambskin leather as the earpads (as opposed to the cowskin leather found on B&O’s higher-end models).

The leather feels nicely soft to the touch, but potentially over the longer term will be less hard-wearing. B&O tells us that this was one of the sacrifices that had to be made to reach this price point.

Although we were told the BeoPlay H4s had a bassy sound signature, we were pleasantly surprised by how they performed in our listening test.

These are not reference headphones and they definitely have a bassy character, but their low-end response is tight rather than booming, and refined rather than feeling flabby.

We ran through a section of Drumbones (our go-to for testing bass), and each bass drum hit had punch, while also feeling measured. The headphones performed well when a track’s bass was supposed to be the focus.

However, switch to a track that’s got bass that’s supposed to serve more as window-dressing and it can feel a little overpowering. She Does it Right by Dr Feelgood suffered when played through the H4s; the bass just took over.

Should you find this to be a problem, you should be able to adjust the frequency response using the BeoPlay app, which will save a sound profile to the headphones to be used across all of your devices when used over Bluetooth.

Switching to Jeff Buckley’s Mama, You Been on my Mind showed off the detail the H4s are capable of, with all of the nuances of Buckley’s vocals really coming through in the presentation.

However, a quieter track like this did expose the headphones to let a lot of background noise in. These are not headphones to cut out the outside world with.

Finally, we turned to Sultans of Swing to get an idea of the sound separation of the headphones, which was great.

First impressions of the BeoPlay H4 headphones from B&O Play are broadly positive. Although still moderately pricey, the ‘cans appear to have brought the same quality of the rest of the BeoPlay lineup to a much lower price point without succumbing to too many compromises.

We were impressed with the overall sound quality of the headphones, but we’d nevertheless like to get our teeth into the BeoPlay app to customise it properly ourselves. Although not always overwhelming, depending on your music tastes the bass level on the headphones might be a little too much.

The only big reservation we have is about the controls: Not having a dedicated on/off and pairing button could impact upon the functionality of the headphones, but only a more extended period of use will determine whether this is a dealbreaker.