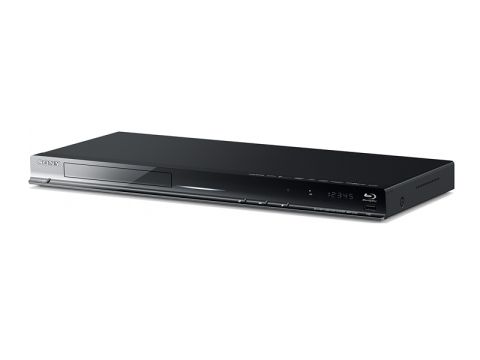 Sony's bottom-of-the-range BSP-S380 Blu-ray spinner offers a lot in performance and specifications for its meagre £130 ticket, but misses out on a couple of the key features that its BDP-S480 sibling brings to the party for only £20 more.

With that in mind, it's only worth considering if you're really hard up, or are looking to upgrade your bedroom setup.

Despite being Sony's entry-level player, it still features the brand's Xross Media Bar menu, which is as intuitive as ever.

There are two USB ports on board, one on the front for media playback from storage devices and one on the back to house the optional UWABR100 wireless LAN adaptor, which you can find online for around £50.

Hi-def picture quality is excellent, with crisp detail and natural colours. And, like the rest of Sony's player lineup, the BDP-S380 can spin Super Audio CDs. Disc loading and boot-up times are fast, and it feels well made for a budget deck, despite being almost comically slimline.

The omissions are either major or minor depending on your needs. You can't stream content over a home network and there's no 3D support – two features which you can enjoy on the £150 BDP-S480.

Also, the BDP-S380 won't play DivX files, which seems odd in this day and age. It didn't get on with my hi-def AVI and WMV files, either.