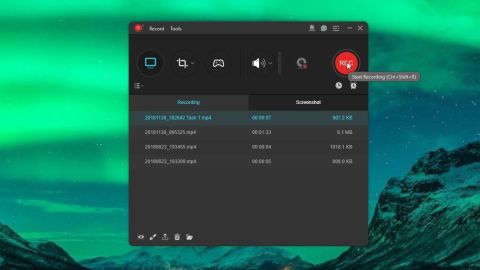 ApowerREC is an impressive screen recorder - simple to use, but highly customizable if you choose to delve into its settings. The ability to schedule recordings and 'follow' specific programs is particularly impressive, and the built-in editing tool is well designed for tidying up recordings without overwhelming you with too many options. Highly recommended.

We’re great fans of Apowersoft’s free online screen recorder, so we were curious to see how the premium desktop software compares. ApowerREC (usual price $39.95 per year) is also available for Android and iOS, but here we’re looking at the PC version.

Everything is clearly laid out, with large icons that display tooltips when hovered over, plus keyboard shortcuts. At its simplest, you can just hit the red ‘Start recording’ button to begin capturing the whole screen – but the software is capable of much more than that.

You can record a section of screen with specific dimensions or a custom area (though unlike some other screen recorders, there’s no option to choose an active window to record) and capture footage from a webcam – either by itself, or picture-in-picture.

It’s also possible to record sound – from your system, your microphone (for narration), both or neither.

There are extensive tools for annotating your recordings while they're being captured, all of which are accessible via a collapsible palette on the right-hand side. These include a paintbrush, highlighter, arrows, shapes, text and (particularly useful for tutorials and presentations) an automatic numbering tool, which isn’t something we’ve seen in screen recording software before.

ApowerREC also includes a screenshot tool (accessible through the Tools menu), which allows you to select a region of the screen, apply annotations and captions, and either save the resulting image or pin it to the screen. It’s a well thought out addition.

You don’t have to start recordings manually; ApowerREC includes a feature called Follow Recording, which starts capturing the on-screen action when you launch a certain program and ends it when you close it again. It’s also possible to schedule recordings to take place between certain times. Many screen recorders offer one of these options, but not both, so this is impressive.

Delving into the settings provides a mass of other options, including the ability to show, hide or highlight the mouse pointer in recordings, customize keyboard shortcuts, choose an output format for screen grabs, set audio cues and much more. There’s a lot to explore, but it’s all neatly categorized and having these advanced options tucked away means the main interface is kept uncluttered for users whose needs are straightforward.

Save and export options

Once you’ve finished your recording, it will be saved automatically and you’ll have the opportunity to adjust it using a simple built-in editing tool. A full video editing application would be overkill – this is a simple tool that allows you to clip your recordings to length, apply a custom watermark, and add intro and outro cards. There aren’t many customization options here (you can only change the text), but the designs are attractive.

When you’ve finished editing, you can export your video in your choice of 14 popular formats, including MP4, WMV, AVI and MOV. This is an impressive selection; many screen recorders only allow you to export in one or two formats, meaning you’ll need another program to convert the exported files.

Recordings will be shown in a collapsible list below the main recording interface, and right-clicking one gives you the option to share it via YouTube, Dropbox, ShowMore, Vimeo, Google Drive or an FTP connection.

Whatever you need a screen recorder for, ApowerREC is well worth a look. It's powerful, flexible and packed with carefully designed features that will make your life easier.