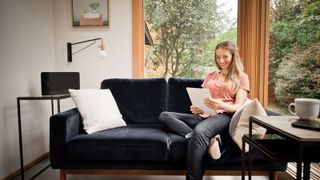 Smartphone batteries don't last long enough for most people – and topping them up at work or at home can be a fiddly and inconvenient business.

But imagine if you could keep your phone charged up just by going shopping, sitting in the office or lazing on the sofa, without having to go to the trouble of plugging your phone in or placing it on a mat. The next wave of wireless charging technology could make this a reality.

There are several new methods of juicing up our gadgets in the pipeline which will mean we'll be able to walk into a room, or within range of a transmitter, and have our phones charged with energy beamed over the air.

And it won't just be for smartphones – we could soon be enjoying the benefits of wireless charging for loads of our favourite gadgets. And what's more, this next generation of charging technology is potentially just a year or two away.

Competition is heating up in the race to be first to market with a truly wireless charging solution, as opposed to the current option of placing your smartphone on a charging pad that still has to be wired, and thus limits you to a particular location.

Near-field charging tech that we're used to, like Qi and PMA, is steadily improving, but it still can't work over more than a few centimetres. There are some other technologies, like WiTricity, that can work over slightly longer distances, but both methods rely on two coils transmitting power across a magnetic field.

The trouble with those technologies is that you need really big coils if you want to increase the range, and it soon becomes inefficient and impractical. However, there are alternatives.

"Our solution, WattUp, is completely mobile," explains Michael Leabman, CTO and Founder of Energous Corporation. "You're not using a mat or a charger. You don't need to worry about where that mat is, or whether you're plugged into a wall.

"Anywhere within 15 feet we'll find the device via Bluetooth, whether it's a phone, a camera, a Bluetooth headset or your kid's toy. We'll locate it in 3D space, and then we'll send power directly to that spot from our transmitter using RF (radio frequency), basically focusing energy on that location."

WattUp operates in the same electromagnetic spectrum as Wi-Fi, but at the higher 5.8GHz frequency. It relies on a transmitter, around the size of a typical speaker, and a receiver which consists of a 3 x 3mm chip and a 10 x 10mm antenna.

The idea is to integrate the technology directly into the printed circuit boards of devices, which makes it ideal for things like wearables, in which space for components is limited.

You'll be able to configure the transmitter from anywhere in the world, logging in online to change the way your device charges. You can stipulate that a certain corner of the room is for charging, or you can choose to only charge a specific gadget once per day.

Early adopters, like cafes, could configure transmitters to offer a half hour of free charging for your device with every coffee you buy, just like they did in the early days of Wi-Fi.

Leabman started the company after becoming frustrated by the sealed battery compartments in modern toys. He looked for an alternative to the constant fiddling with tiny screws to change batteries, and when he couldn't find one, he decided to invent it.

The idea has snowballed since then, expanding to cover all sorts of devices and Energous has engaged over 100 potential partners in the process.

Wireless charging can't compete with wired charging when it comes to speed or efficiency, but Leabman believes the convenience makes it worthwhile.

"Wi-Fi is still an order of magnitude slower than plugging in your gigabit ethernet, yet you never plug in [your laptop]. Why is that? Because it's good enough to have 30 or 40 megabits," he says. "It will be a similar trend with wireless power."

The specifics depend on the size of the transmitter and receiver, but typically WattUp can hit five watts within five feet, two watts at between five and 10 feet, and one watt at between 10 and 15 feet. This means that being within five feet of a transmitter is the equivalent of being plugged into the wall for most current phones. A transmitter in an enclosed space, like your car, would work well.

In terms of efficiency, Energous is targeting around 20 to 30% within five feet, with the figure falling off at greater distances. Wired charging is around 85% efficient, and current near-field wireless charging mats are between 50 and 75% efficient.

"Most people keep a light on above the kitchen sink for a couple of hours every night so if their kids walk in they don't break their toe or something," Leabman says.

"Our view is that wireless charging is probably no different, and the reason is, it's not always transmitting. It's only transmitting when your device needs charge. It charges up the phone for half an hour or an hour, whatever it takes to charge fully, and then it turns off.

"It might turn on infrequently to trickle it up a percent or two here or there, but it's not on 24/7."

The amount of electricity we're talking about here, and the costs involved, are negligible on an individual level, although some people will be concerned about the impact on a large scale, which could see smartphone energy use tripling in return for the convenience of this new tech.

"If you look at how much it costs to charge your phone for a year it's like $2," says Leabman. "Even if we're a third as efficient as plugging into a wall, so it costs you $5 or $6 a year, is that worth the utility?"

Another concern is safety, but Leabman is quick to point out that WattUp is like Wi-Fi, but using a higher frequency partly because it doesn't penetrate very well. Energous is also working with the FCC to ensure safety regulations are met.

Energous has come a long way in three years, but it's not the only game in town. Ossia is developing similar technology, but it has been around a lot longer, and is yet to release anything.

There's also TechNovator XE, which has developed a resonance technique it claims can work over distance. It intends to offer power routers that can charge your iPhone, when it's enclosed in a special case, at a distance of up to 17 feet, and plans to launch a Kickstarter campaign soon.

Then there's uBeam, which is developing a system that sends electricity as sound waves, although it has yet to demonstrate the technology; doubts have been raised about how well it might work, and they're summed up neatly in this Spectrum article.

There are a couple of important distinctions with Energous. First, the WattUp technology has undergone independent testing to prove it works. Second, Energous has some major partners on board, and one in particular that's set to launch the technology in late 2016 or early 2017.

There are already plans to get transmitters into hotels and cafes, and there are ways to retro-fit the receivers via batteries or cases. However, it may take a major player to push wireless charging into the mainstream.

"About a year ago we signed a licensing agreement with one of the top five consumer electronics companies in the world, and they're very eager to put us in a variety of different devices, mobile devices and other consumer electronics," says Leabman. "We've been heads-down with that company in the last year."

He's not allowed to name the company, but it's easy to imagine wireless charging taking off in a big way if launched by a tech giant like Apple or Samsung – and if those phones support it, it's not hard to imagine millions of people buying wireless power routers too.