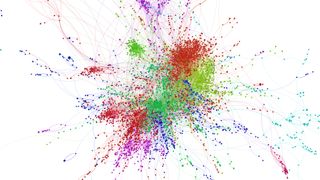 The mythical world of Star Wars can feel almost as vast as the universe itself, with characters and events spanning not just seven films, but also a plethora of books, comics and video games.

Now, thanks to data collected from the Ecole Polytechnique Fédérale de Lausanne (EPFL), the extended Star Wars universe is easier to take in for nerd and newcomer alike.

Utilizing a new program that remotely compiled and cataloged the Star Wars wiki, Wookieepedia, EPFL staff created a massive database that includes every character ever who has been a part of the sci-fi universe.

Armed with the data, the program then assembled a variety of infographics, creating visual representations of the Star Wars mythos that range from purely informative to gorgeous.

Interesting stats about the universe were extracted from the program's algorithm. For example, there have been 21,647 individual characters who've appeared over the course of the series' 36,000-year-old timeline, and a whopping 2,000 of them are nameless nobodies who were still counted.

Another graph shows that when broken down by species: 78% of the Star Wars characters are humans, begging the question if clones or droids get their own category.

The data could also be turned into a sprawling, colorful web, wherein the program connects characters by era, faction and interactions with the rest of the Star Wars roster.

Using these threads, the program could also quantify the most impactful members of the galaxy, or, put another way, the characters with the most links to other characters.

Try to act surprised when data shows that Anakin Skywalker officially leads the ranks as The Galaxy's Biggest Deal, just ahead of his dubious mentor and even his own son.

"With the release of the new movie, it is the perfect time to share some fun facts about Star Wars that I didn't know before," he said.

The algorithm can make connections using what Benzi likens to "the wisdom of crowds," which the EPFL team believes can help bridge missing links in sociological or scientific studies, filling the gaps for other researchers attempting to pool their knowledge.

In the meantime, the EPFL's feat grants us some fascinating trivia for one of pop culture's biggest phenomenons, to include how under-represented the Mon Calamari - Admiral Ackbar's species - are.