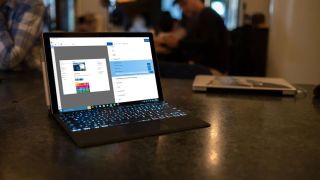 Another gremlin has been spotted in Windows 10’s Fall Creators Update, with this particular issue reportedly causing installation to fail for those with certain motherboard and storage combinations.

The problem is said to primarily affect those who use a motherboard with Intel’s X299 chipset and also have an NVMe SSD drive, as CNET reports (SATA solid-state drives are not running into trouble, apparently).

A similar bugbear hit home with the previous Creators Update back in the spring, as well, and now fresh folks are sitting through the same nightmare – namely, when the PC reboots during installation of the upgrade, an error message is thrown up, and the install is simply failing.

The issue has affected those with Asus, MSI and Gigabyte motherboards, although CNET heard from one mobo vendor (the website didn’t name which) that said it was unable to recreate this particular error.

So it’s not clear if only a relatively small number of folks are affected here, but there are certainly a vocal group of error-message-sufferers across several support sites (including Microsoft’s own answers forum, and the Asus ROG message board).

And they’re not happy – obviously enough – particularly seeing as this error reportedly surfaced earlier this year.

The good news is Microsoft has said it’s aware of the problem, and is currently working with manufacturers to resolve it. So for now, folks will have to sit tight.

There is a confirmed workaround, although it’s not exactly ideal: rather than update a current Windows 10 installation, you can perform a fresh install of the operating system from scratch, and in this case no problems are encountered.

Incidentally, if you need any sort of troubleshooting help with installing the Fall Creators Update, check out our guide on how to fix common problems with the upgrade.

Meanwhile, while the Fall Creators Update is still rolling out, Microsoft has deployed a new Redstone 4 preview build (the next big update due in 2018) for Windows Insiders (testers) in the fast ring.

This only consists of minor tweaks and bug fixes, mind, although it does rejig ‘ease of access’ settings to better organize them, and introduces a new option for universal apps which run on startup that allows the user to view all tasks specified by the app developer. That’s about your lot, though.