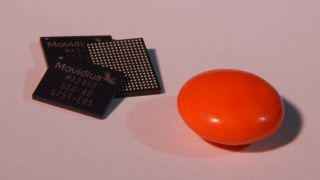 Ahead of Lenovo's Tech World later this week, Movidius, a company you may or may not have heard of, has announced that its new Myriad 2 vision processing unit (VPU) will be used in upcoming Lenovo products. While it may not seem too exciting on the surface, it could very well be the spark of a revolution in mobile virtual and augmented reality.

But let's back up. What exactly is a VPU? According to Movidius, it's an ultra-low power chip that's solely dedicated to taking on the more intensive tasks commonly used with virtual reality applications. Things like head and eye tracking, room mapping and gesture recognition.

Have you noticed that today's phones become extremely hot and drain battery at an alarming rate when being used with Google Cardboard and Samsung Gear VR? (It's really difficult not to notice.)

This is because the processor and GPU are being worked to death by these taxing tasks, all the while running them in tandem with the mobile operating system and whatever other apps you have running in the background. Today's smartphones are mightily capable, but these futuristic applications bring them to their knees rather quickly.

The Myriad 2, which requires less than one additional watt of power, will theoretically provide large gains in performance by doing all of the heavy lifting for VR and AR tasks. Digging into more details of the VPU, it contains 12 programmable cores, an image signal processor (ISP) and hardware accelerators.

It takes Myriad 2 to Tango

Movidius' VPU technology is heading to Lenovo products this year, which could very well include the company's upcoming Project Tango smartphone, as well as the rumored Moto Z and potentially, some unannounced Google Daydream-ready projects.

Strangely, the Myriad 2 and Lenovo partnership doesn't actually name-drop any of those mobile VR initiatives. But, given the large amount of Google IO 2016 showtime dedicated to VR and AR, and Lenovo's commitment to the Android platform, it's almost a given that this tech will pop up in a ton of Tango and Daydream-ready devices this year.

Whatever happens, we'll be at Lenovo Tech World 2016 on June 9 to see it all unfold.