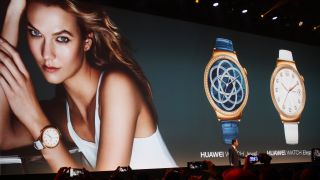 Huawei has taken to the stage at CES 2016 to introduce two new Huawei Watch models just for women - the Jewel and the Elegant.

While the two new wearable's specs run very similar to the three Huawei watch models already released, the Huawei Watch Jewel and Huawei Watch Elegant also includes a built-in speaker, making these the first Android Wear watches allowing you to take calls directly from the your wrist, as well as allowing for voice commands.

Still, the main draw for the Jewel and Elegant is basically its looks, with both watches boasting rose gold-plated, 316L cold-forged stainless steel bodies and Italian leather straps in either blue of white.

Huawei also teamed up with Swarovski to circle the Jewel's face with 68, 1.5mm Swarovski crystals.

Though an official launch date wasn't revealed, the company did announce the Huawei Watch Elegant will cost $499 and the Huawei Watch Jewel will be priced at $599 and will be be available during sometime in Q1 of 2016.