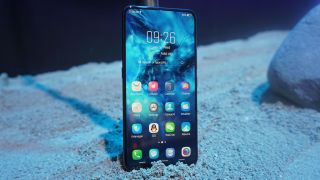 Chinese smartphone maker Vivo recently unveiled two flagship devices in its home country China, dubbed as the Nex A and Nex S. Now, there are some reports suggesting that the two Nex devices will be launched in India in the second half of July with a starting price of Rs 40,000.

At the moment it is not known if Vivo will launch both, the Nex A and Nex S smartphones, however, the expected price tag of Rs 40,000 is close to that of the Snapdragon 710-powered Nex A. The Snapdragon 845-powered Nex S is expected to be priced higher.

Vivo had recently announced the Vivo X21, the first device with an in-display fingerprint sensor in India and the Nex S is the second device from the company to feature this technology. Apart from this, both the devices sport a pop-up selfie camera and Screen SoundCasting Technology to replace the traditional earpiece.

The Vivo Nex A and Nex S run on Android 8.1 Oreo with the company’s Funtouch OS 4.0 and Energy UI skinned on top. Both the devices feature a 6.59-inch full HD+ Super AMOLED display with a resolution of 2316 x 1080 pixels and an aspect ratio of 19.3:9. While the Vivo Nex S features an in-display fingerprint sensor, the affordable Nex A sports a rear mounted fingerprint sensor.

The Vivo Nex A and Nex S feature a dual camera setup consisting of a 12MP primary dual pixel sensor with 4-axis OIS, f/1.8 aperture, phase detection autofocus and a secondary 5MP sensor with f/2.4 aperture. On the front, both the devices sport an 8MP selfie pop-up camera with f/2.0 aperture. Vivo has used micro-stepping motors with independent drive ICs and precision control algorithms for the pop-up camera.

The Vivo Nex A and Nex S are powered by a 4,000mAh battery with fast charge support and connectivity options include Dual 4G VoLTE, Wi-Fi 802.11 ac, 3.5mm audio jack, Bluetooth 5.0 LE and a USB Type-C port.