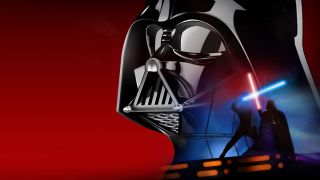 The Internet is full of thinkpieces about how to watch Star Wars. Some fans will passionately tell you to watch them in the order they were made, while others will say to hit them chronologically.

Then there's the Machete order, which places episodes two and three between Empire Strikes Back and Return of the Jedi, skipping The Phantom Menace completely.

But somehow, the decision on viewing order is made infinitely more difficult when it's not just about the order you watch films, and more about how you introduce your son to the franchise that defined science fiction for 30 years.

This has been my dilemma. For more than six years I've internally debated the details of how I would introduce my son to the films I watched so much as a kid the VHS tape of Return of the Jedi actually snapped in the machine.

And with The Force Awakens arriving at cinemas around the world this week, the time seemed perfect to give him the intergalactic education he so desperately needed.

A large part of the indecision over viewing order stems from not just my extreme disappointment in the prequel trilogy, but also the fact that the Blu-ray versions of the original trilogy got a digital "upgrade" from George Lucas.

Unnecessary CGI characters, ridiculous audio additions, Greedo shooting first, Hayden Christensen – the list of Lucas additions is long and complex, and every change takes away from the beauty that was the original films.

I wanted to ensure my son experienced the same sense of wonder, of magic that I did when I first watched the movie 30 years ago. So it was as if all my Star Wars Christmas Special dreams had come true at once when, days before we sat down to marathon the original trilogy, I managed to get my hands on the Despecialized Editions of the original trilogy.

For those unfamiliar with the Harmy Despecialized Editions, the general gist is that a group of people have been painstakingly recreating the theatrical release of Star Wars, The Empire Strikes Back and Return of the Jedi in high definition. Working through each and every frame, they have been attempting to remove the annoying digital additions of the Blu-ray release, restoring the film to the way it was when it blew audiences away 30-plus years ago.

It's not just the ridiculous inclusion of Gungans at the end of Return of the Jedi or shaving Darth Vader's eyebrows either – the Despecialized release fixes the weird colour hue of the Blu-ray release, leaving a much more natural film.

It's worth mentioning the murky legal ground around fan edits of movies, however. Fan edits tread a thin line between copyright infringement and 'fair use' policies and Lucasfilm itself has moved against a few sites and editors.

On its site the Harmy Despecialized Editions crew attempt to make it clear they do not condone piracy and that its edited versions are not to be bought or sold. They also state its edits should only be shared between owners of legitimate and officially released versions of the films.

It boggles the mind that fans have to take it upon themselves to recreate the film they fell in love with in today's era of special editions and director's cuts. Many fans (myself included) loudly hoped that Disney's acquisition of Lucasfilm would finally see the theatrical release of Star Wars make its way to Blu-ray, although that has yet to materialise.

When films like Blade Runner can somehow include five different versions of the film in a Blu-ray release, there's no reason that Star Wars fans shouldn't be able to enjoy the same experience.