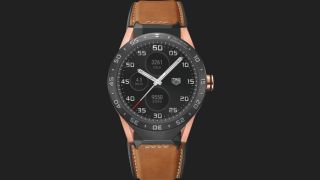 Inside, it seems that the watch is basically identical to the one that was released last year, with the same Intel dual core processor, 1GB RAM, and 410mAh battery. Even when it was first released, these specs were available in other watches for a lower price.

Of course, if you’re willing to drop such a huge sum on a smartwatch you care about its outside as much as its insides, and with this Tag Heuer model most of the extra cost seems to be a result of its 18 carat rose gold casing and brand name.

Adding to the sense of expensive exclusivity that this watch is no doubt intended to inspire, you can’t purchase it online like Tag Heuer’s other version; instead you’ll have to visit one of its retail stores where the watch will be gently placed on your wrist and not fired through the post.

This release is coming not long after Apple decided to vacate the luxury smartwatch market, dropping its extortionately expensive gold edition smartwatches and replacing them with its $1,299 / £1,299 / AU$1,799 Apple Watch Series 2 ceramic models.

It’s likely that Tag Heuer has seen this section of the smartwatch market open up and decided it’s perfectly positioned to slide into it considering its reputation for luxury. However, Apple will have had good reason for dropping its gold edition watches.

The number of people willing to drop such a large sum of money on a watch that contains year old specs is probably very small.

If you’re on the lookout for some Android Wear action but don’t have almost $10,000 burning a hole in your pocket there are other options to consider.

You could take a look at the significantly less expensive but still stylish Huawei 4 from Huawei With prices starting at around £299 (US$349.99 / AU$549) the Huawei 4 still isn't cheap but it's made from solid, high quality materials and offers the same amount of on-board storage as Tag Heuer's Connected making it an attractive and affordable alternative.

Another watch worth considering is the FossilQ Founder.  Fossil is a brand that knows watches and how to make them look good, which is immediately apparent with the FossilQ Founder. It doesn't quite have the weighty expensive look of Tag Heuer's offering but it's handsome. It also offers almost identical specs at a fraction of the cost, with prices starting at $295 (£279, about AU$382).

If you absolutely must have that rose gold casing, though, don’t look past the 2015 iteration of the Moto 360. It's one of the most popular Android Wear timepieces on the market for a reason: stylish, affordable, and good internal storage it's certainly worth considering.