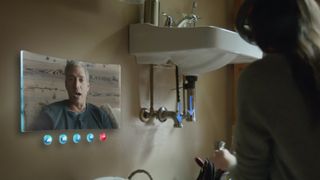 Microsoft’s preview of Windows Holographic is clearly a grab for headlines, a way for it to brand itself as a future-facing company. It wants to achieve what the now-paused Google Glass Explorer program could not and what Oculus has not. This announcement, though, came at the end of a presentation where “rough build” was a term frequently used to refer to the fact that Windows 10 is far from finished. Everybody wants to build hoverboards and jetpacks, but this is a Microsoft that still has the great responsibility of powering the enterprise world, where there’s going to be a lot of heavy lifting in the transition away from Windows 7.1 and 8.1.

While Microsoft highlighted and promoted their Windows Insider program, which has been working to finesse Windows 10, we now know that this isn’t getting 100% of the the company’s full attention. How valuable is all of the praise Satya Nadella is winning this week for Windows Holographic if Windows 10’s extremely hyped launch doesn’t go off well?

The Insider program is a clever way to use an excited group of loyalists to iron out bugs and receive feature requests, but is it enough? The word “monumental” was frequently used about “this day” in Windows history. Hopefully it’ll be for the right reasons.

The odds of everything going smoothly - for every single user - on launch day are extremely low. But one headline grabbing glitch could taint this moment. That’s why I’m hoping Microsoft is internally prioritizing the enterprise, desktop, and laptop experiences, in that order. This version of Windows may see the most early adopters that Microsoft has ever dealt with, thanks to Microsoft’s free-for-the-first-year upgrade offer. While the change in strategy nods to the industry-wide devaluation of software, it certainly raises the stakes for the final shipped build of Windows 10. Companies with tons of early adopters love to celebrate that fact, but there is inherent risk provided by a legion of various and diverse installations.

There will be a lot of excitement around this launch, we could even see many jumping to download it without question. In the business world, Microsoft is encouraging an even blinder approach to updates. Their Windows Update path, where all of the latest updates get deployed from Microsoft themselves, is akin to loaning the keys to your business. That kind of agreement requires a trust to exist, one that isn’t hampered by concerns of a Microsoft spread too thin.

Look at Apple: in Tim Cook’s push to pump out major yearly updates on desktop and mobile, the quality of said software has dropped. People don’t trust over-the-air updates to not brick their phone, and analysts are warning people against installing the major releases, instead advising people to wait for the .1 or .2 update to fix expected bugs. That’s a situation that hasn’t been seen in a long time for Apple, and a dangerous spot for the company to be in, when competitors can easily challenge the marketing notion that their products “just work.”

With a 2+ hour event, featuring two surprising new products, and cloud services positioned to rival Google Apps and conquer iCloud, Microsoft is telling the world that they can walk, chew bubble gum, stream music, and Skype all at the same time. It wants you to think that Windows 10 is the long-promised OS that integrates all of your computers, with apps that look and work the same everywhere. That promise has never been met before, and now they’re going to tag holographic VR on top?

Not just any holographic VR, but one with the same apps that are supposed to work up and down the line in Windows 10? With a killer app that allows you to build your own holographic designs, which can later be 3D printed? It doesn’t take much to look at these historically grand aspirations with suspicion.

Early in the event, Terry Myerson (Executive VP of Operating Systems), made a very proud and hopefully not foolish claim that their security software could have stopped recent headline making attacks from happening. He didn’t even say it in a modest tone, but as a fact (and almost as a challenge).

What success could mean

Fortunately, Microsoft seems to be aware of their brand problems. Throughout the event, many nods were made towards rebuilding the trust Microsoft has with the public. That there are 1.5 billion people relying on Windows to do their jobs; to have everything function as advertised. Nadella was humble to admit that many today just see Windows as a platform they need, rather than one they have any want or affection for. For that need to continue, Windows has to be seen as reliable for businesses.

Success in these new fields would certainly lift Nadella’s Microsoft, which isn’t willing to stand still, but the commercial world is fickle and trends can just go poof. The enterprise, one of Microsoft’s core businesses, the market that has yet to abandon Microsoft, needs to be receiving the most finished product possible. When Microsoft ships their first HoloLens sets to customers, growing pains like bugs and differences aren’t just inevitable, but allowed. They are going to be defining a market, and it may not look exactly like what customers expect.

They don’t have that much room for error with businesses, where one crash or bug could lead to a company going through the next Sony-level hack. Sure, Cortana is being positioned as SuperSiri, ready to assist in all levels of Windows 10, but she won’t be able to save the company in times of crisis.