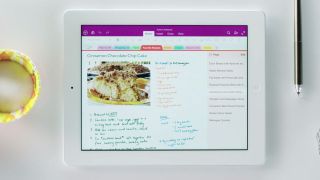 Not wanting to be left out of the Microsoft's constant flurry of Office updates, OneNote users have a couple of new things to shout about.

Firstly Microsoft has finally relented and added the popular handwriting feature to its OneNote for iPad app to allow users of the tablet to take advantage of something that has been a part of OneNote for Windows since 2003.

The second announcement is that optical character recognition (OCR) has been enabled across all versions of OneNote that currently exists, which in layman's terms this means that OneNote users can search for text in all new images added to OneNote.

Like all of its recent product updates, Microsoft also teased a couple of future updates that will see OneDrive for Business support added to OneNote plus the ability to use OCR on images that are attached to older notes.

It was less than a week ago that Microsoft freed up five more features for the free edition of OneNote, and the handwriting and drawing features of OneNote are expected to become an integral part of the next Surface Pro.