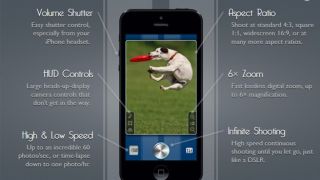 Apple has reportedly purchased the company behind the photography app SnappyCam, which enables the iPhone to take continuous, full-res pictures at higher speeds than the native camera

Following the app's recent disappearance from the App Store, TechCrunch brings word that the one-man SnappyLabs operation is now under Apple's command.

The SnappyCam app, made it possible for the iPhone's camera to snap full resolution shots at between 20-30 frames per second, depending on the iPhone model and up to 60fps at lower resolution

Naturally, that's significantly faster than Apple's own iSight camera software, and allowed the app to become a hit among iPhone users in many countries.

Interest from the big guns

According to TechCrunch's sources, the SnappyCam app had attracted interest from "most of the major players," but it appears that Apple has won the day.

The likelihood now is that Apple will fold SnappyCam's functionality into the iOS camera at some point, or will have the developer work on future iPhone camera tech.

Terms of the deal have not been confirmed and Apple has not commented on the reports. However, the girlfriend of founder John Papandriopoulos, posted on Facebook to congratulate her partner, which, we suppose is as close to confirmation as it comes.

Papandriopoulos is reportedly an electrical engineering phD at the University of Melbourne, but student or not, the Fosters will probably be on him tonight.