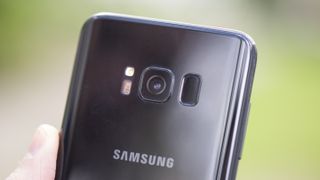 For the most part the Samsung Galaxy S8 is an improvement on the Samsung Galaxy S7, but moving the fingerprint scanner to the back was arguably a change for the worse. However, a patent suggests it’s one Samsung’s looking to remedy for the Galaxy S9.

Found by GalaxyClub, a Samsung patent application shows a fingerprint scanner built into a little notch at the bottom of the screen, a lot like the notch on the Essential Phone or to a lesser extent the iPhone X, but at the bottom rather than the top, and housing a scanner rather than a camera.

This would allow Samsung to continue offering an almost bezel-free display, while having a fingerprint scanner in an arguably more convenient location than the Galaxy S8.

It’s worth noting that the application was made in 2016, so it’s not brand new, and that patent ideas often don’t get integrated into products, so we wouldn’t count on seeing this, but it’s a possibility.