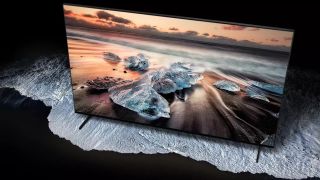 Samsung has launched its QLED 8K range of televisions in India. This ultra-premium series boasts of the world's first Quantum LED 8K TV and comes in four sizes. These televisions offer 8K video playback and while there's a scarcity of 8K content, the TVs are also capable of upscaling both audio and video to match the pixels of the panel.

Samsung QLED 8K TVs are available in 65-inch, 75-inch, 82-inch and 98-inch screen sizes. The 65-inch SKU will be available sometime in July and so its price hasn't been revealed yet.

Samsung QLED 8K and 2019 QLED lineup are available at Samsung Smart Plaza and other retail stores along with Samsung Shop online store.

On Samsung's QLED 8K TVs, users will be able to watch 8k content along with AI-based upscaling for lower resolution content. This is achieved by the Quantum Processor that lies under the hood which can transform source footage to 8K resolution by adding more depth, sharpness and brightness to the 33 million pixels.

In addition, with the new QLED 8K televisions, you get Bixby 2.0 which allows users to give voice commands to the TV via One Remote Control, displaying the results shortly thereafter. These TVs also support Apple Airplay 2 which allows playback of video, music, photos, podcasts from Apple products seamlessly to the Samsung TV.

Samsung’s QLED 8K TVs can be mounted on the wall without any leftover gap. There are no wires coming out of the back as it makes do with a single 5-meter optical cable which connects to Samsung One Connect Box. This Connect Box acts as a one-point-stop for all the external inputs. The One Connect Box also pairs up with One Remote Control that lets users control all the input devices from a single remote.