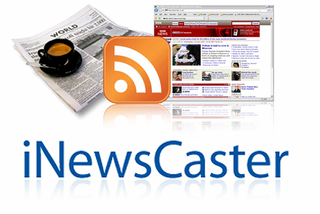 Formerly known as MT-Personal NewsCaster, the new iNewsCaster is updated and packed with features

MagneticTime has today launched a brand new version of iNewsCaster RSS reader. iNewsCaster Version 2.0 was formerly called MT-Personal NewsCaster. With its new name comes a new look, and enhanced functionality with a built in Web Browser.

The cool thing about iNewsCaster is that it allows you to listen to all your personalised RSS feeds on your MP3 player, PDA, mobile phone and desktop wherever, and whenever, you like.

It all works by extracting text from RSS feeds. The software converts the text into spoken word MP3 files. This 'audioised news' [their phrase, not ours] is then spoken on the desktop or can be archived to a news databank for loading onto an iPod for listening on the go.

"iNewsCaster liberates users from the drudgery of browsing multiple sites to keep up with their news - be that technology, world, sport or even celebrity gossip," says Shane McAllister, executive vice president with MagneticTime. "iNewsCaster lets you listen to your news feeds without interrupting your work."

RSS news feeds on your iPod

MagneticTime says that its new program saves lots of time. It sources the relevant RSS feeds, pulls them into the software, converts them and exports them to the relevant portable device - all automatically.

"Time is scarce," adds McAllister. "Listening to news as it happens on your desktop makes keeping up to date simple and incredibly efficient. In fact, it quickly becomes quite addictive, and users are keen to hear what Heather (the voice of MagneticTime) has to say next!"

The whole thing sounds like a pretty decent idea. We haven't tried it out yet so we're not sure how robotic 'Heather's' voice is likely to be. Computer generated voices have a habit of being fairly unbearable to listen to for extended periods. But MagneticTime assures us that it has spent a lot of time making it as good as possible.

Currently, A PC version of iNewsCaster is available for download online via the website . It will shortly be available in retail stores and in a Mac version too.