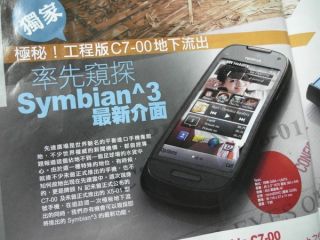 Nokia's next big touchscreen for the mid-range market, the Nokia C7, has been spotted in a Hong Kong magazine, packing the next generation OS.

The C7 looks to be a successor to the popular 5800 XpressMusic and X6, offering a 3.3-inch capacitive touchscreen with 'near HD' resolution of 640x360.

More importantly it will be rocking the Symbian^3 OS, with multiple widgets and Home screens as well as multi-touch web browsing and better memory management.

The Nokia C7 will have a slim 11mm profile, as well as similar specs to the Nokia N8 with an 8MP camera and 720p HD video recording.

If the rumours turn out to be true, then this could be a real turning point in Nokia's fortunes at the mid-range of the market, as its current dominance was in danger of fading quickly if it didn't manage to pack better tech and an improved interface into its phones.

We've no idea on the important things like a UK release date or UK pricing, but stay tuned - we reckon we're going to be seeing a lot more from this phone in the near future.

From Engadget China via Phone Report