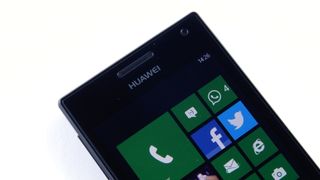 It's been a while

Huawei's last Windows Phone was launched almost two years ago, and the firm has no plans to get back into Microsoft's software platform.

TechRadar spoke to Shao Yang, Huawei's CMO for Device, during a special briefing at the firm's campus in Shenzhen, who explained why we haven't seen any more Windows Phone.

Yang said: "the biggest problem is the lack of DIY on Windows Phone, it's all very similar across manufacturers. On Android you can have a very different character."

Huawei enjoys the freedom of implementing its Emotion UI on its Android devices, providing them with a different look and feel to rival handsets - something which isn't available with Microsoft's platform.

"It's hard to really differentiate between Huawei and other manufacturers [with Windows Phone]" Yang explained, "Android is a better choice for us."

Huawei isn't giving up on Windows completely and with Windows 10 on the horizon the Chinese firm is considering dual-boot tablets that would run both Android and Windows.

We've already had confirmation that Huawei will launch at least one new tablet at MWC 2015, so we'll be keeping an eye out for any dual-boot slates.