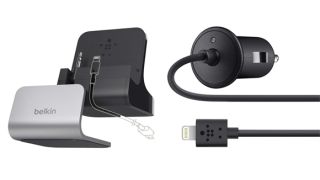 Belkin will become the first third-party manufacturer to sell Apple-approved Lighting accessories, giving everyone reason to rethink their orders for those Lightning knock-offs.

The first two accessories from the company will come in the form of a car charger and a charge and sync dock. Both are scheduled to ship this month for $29.99 (no UK or AUD pricing has been announced yet).

The 4-foot hardwired Belkin Car Charger for Lightning is an update to the company's previous 10 watt, 2.1 amp car charger.

This version of the car charger will be compatible with iPhone 5, iPad mini, iPad 4, iPod touch 5th generation and iPod nano 7th generation.

The Belkin Charge + Sync Dock, also $29.99, doesn't come with a Lightning cable. Instead, it feeds an existing Apple Lighting cable through a back channel.

This iPhone 5-only device has other nifty features, though. It's case-compatible, has a removable magnetic base, an audio-port port for headphones or speakers, and a foldaway AUX jack.

When you're not first, you're last

It's fitting for Belkin to make the first third-party Lightning accessory, as the company was also the first to develop accessories for the 30-pin connector in 2003.

"People are clamoring for official Lightning accessories," Belkin CEO Chet Pipkin told TechRadar. "We have been working hard to be first to market with products that support the new connector."

"We are happy to have our car charger and dock in customer's hands before the holidays and look forward to launching additional Lightning products this year as well."

Because Apple has demanded approval of all third-party Lightning accessories and included a processor in its design, there hasn't been a flood of cheap Chinese cables just yet.

The good news is that spending $20 on an Apple-branded cable and one of these $29.99 accessories shouldn't go to waste, as it seems as if Lighting is here to stay.