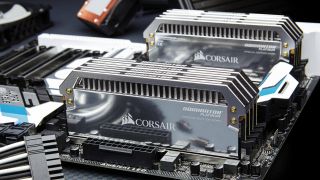 Hopefully the cost of RAM doesn't increase too much (Image credit: TechRadar)

Over the last few months we've been enjoying some pretty low prices for the best RAM and SSDs. However, that might be ending soon, as some SSD manufacturers are reportedly discussing price hikes.

Don't panic yet, though: it's important to note that this isn't confirmed, and is little more than rumor at this point. But if you were planning to jump on that cheap SSD deal you've been scoping out, it wouldn't hurt to pull the trigger right now.

If these reports are to be believed, RAM and SSD pricing could jump to where they were back in 2018, when it was ludicrously expensive to even upgrade to middling RAM or a small SSD. We just hope that if the prices do increase, they don't get to a level where the average consumer can't get into computing.

It is a shame, too, as it is one of the best times to build a new computer, especially now that AMD Ryzen 3rd Generation processors, Nvidia Super and AMD Navi graphics cards have finally arrived.