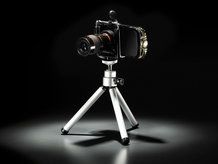 Apparently 67 per cent of us are using our mobile phones to capture snaps while on the go in a recent survey by network 3 that might take the title of 'most obvious this year'.

While we at TechRadar don't usually publish such obvious facts, the report contains a small comedy a-bomb that we just HAVE to share: 3 are calling such people Mo-Phos or Mobile Photographers.

So, here it is: according to the poll of just over 2,000 people earlier this year, 45 per cent of Mo-Phos are using our phones to capture 'quirky and interesting sights while on the go'.

However only three per cent of Mo-Phos (we'll never get bored of this name) use their cameras of choice to take holiday snaps, and just four per cent use them for wedding photography.

3 has even published a small history documenting the rise of the Mo-Pho:

Who cares about the obvious survey...let's all get behind the phrase Mo-Phos!