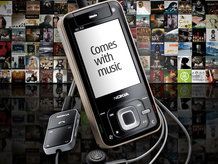 Nokia's Comes With Music to hit the UK first

Nokia has announced it will be bringing its 'Comes With Music Service', which offers all you can eat music downloads to a compatible Nokia handset, to the UK first.

It will first be available via the Nokia 5310 XpressMusic 'Comes With Music' phone, which can be garnered from the Carphone Warehouse exclusively.

Nokia has reportedly gambled heavily on the service, apparently paying a high premium to each music company signed up to offer its catalogue for CWM.

Warner Music, Universal Music and Sony BMG are all involved at present, but more are expected to follow.

Users can download unlimited tracks for a year, and can keep said music after the contract has expired.

Nokia will also back up all licenses on its music store, so if you lose a track it can be re-downloaded.

Nokia is looking to make the service one of the big hitters in the Christmas sales, with the 5310 expected to cost around £150 with the CWM service included, though apparently other handsets will debut as well.

Nokia's UK managing director Simon Ainslie says: "This is a unique proposition. Nobody has launched an unlimited music service that allows you to keep your music with no catches.

"What we are trying to do is bring back some value to the music industry from people who are not paying for music. There are a lot of parents who would like to legitimise their children's purchasing of music."