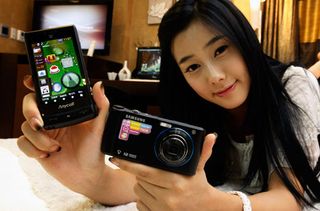 Samsung could be set to launch a new variant to its Galaxy Tab range, rebooting the original device and adding in some next-gen screen tech too.

The new device would have a 7-inch screen, but use the same style of AMOLED displays as seen in the Galaxy S, according to sources quoted by OLED-Display.

We're very much talking about a rumoured device here, and the rumour seems based on the fact Samsung showed off 7-inch OLED display prototypes back in March, which seems a little speedy to have made it into a device already.

Samsung has moved to distance itself from rumours it will be launching a glut of new devices imminently, which could preclude the new Galaxy Tab:

"Some media have been reporting that Samsung is preparing to launch nine new smartphones and two new tablet devices. While Samsung is continuously working on new devices for our customers, the details being cited are not accurate in this case.

"We appreciate the interest in our upcoming mobile devices and will share more information once it's available."

There's a spec sheet for the rumoured Galaxy Tab P62000 and everything - so let's indulge in a little rumour mongering before dubbing this Not Very Likely.

Apparently we're looking at a Honeycomb device with a 7-inch Super AMOLED screen, with a resolution of 1024x600, including a 3MP camera (rear) and 2MP camer (front).

It will have full 3G connectivity and the same 1.2GHz dual-core engine as the Galaxy S2, plus a similar 1GB of RAM... if only it were real.