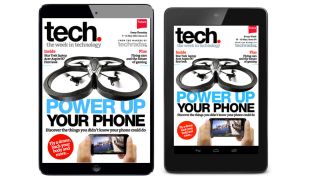 The latest issue of tech. magazine is out now and available on a device near you. TechRadar's weekly dose of all things technology is available on both Android and Apple devices, as well as your PC and this week it is all about unleashing the power of your smartphone.

Inside issue 24 you will find information on the latest and greatest apps and add-ons for your phone, as well as a look back on the week in technology.

And what a week it has been, with Bill Gates having a dig at Apple for the iPad not providing a true Post PC experience, to Adobe ditching Creative Suite for its Creative Cloud.

The magazine also hosts a streaming stand-off between Apple TV and Roku 3 and tells you all you need to know about Microsoft Illumiroom and the BBC rival that's being tested right now.

There's also news on the first vertical take-off flying car, an analysis of where apps are going now that Apple is close to hitting the 50 billion mark, and in-depth looks at Acer's Star Trek laptop, the Acer Aspire R7, Napster's relaunch and the Kobo Aura HD.

Out every week, grab your copy of tech. from the Apple Newsstand, Google Magazines or Zinio now!