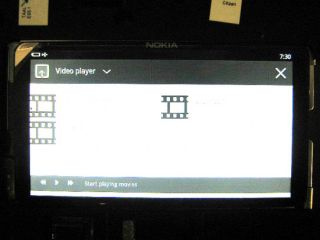 A Nokia tablet running MeeGo... could it be?

What appears to be a Nokia tablet running the long-awaited MeeGo platform has appeared in some fuzzy spy-shots today.

Only one thing is certain from the screengrabs; the device will play video. What formats these will take, and whether it will handle full HD or even 3D remains to be seen.

There's also what looks like an aeroplane in the top left-hand corner, which suggests an airplane mode with all the device's connections severed; presumably these would include Wi-Fi and possibly 3G or Bluetooth.

The darkness of the shot makes the device form hard to make out but its bezel certainly looks relatively thin, on a par with the Dell Streak, perhaps.

There's no guarantee that this is a product ever intended for market, but with every manufacturer and its dog working on a tablet device at the moment, we certainly wouldn't be shocked to discover this is a prototype product, throwing MeeGo into the iOS, Android and Windows 7 tablet OS mix.

We're certainly hoping for some kind of news on MeeGo from Nokia at Mobile World Congress next month; we'd settle for a smartphone but a tablet would be nice too.

Via SlashGear and My Nokia Blog